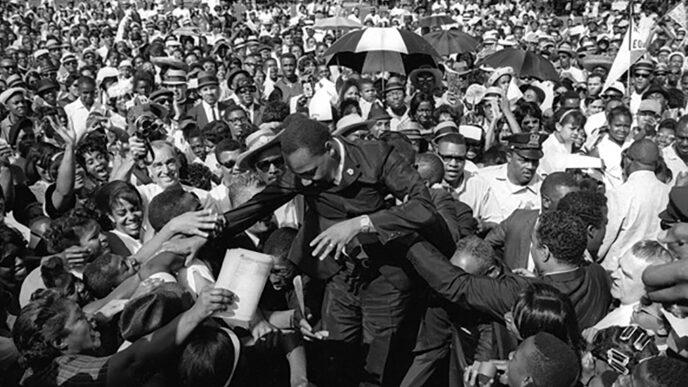 The legacy of Dr. Martin Luther King, Jr.—his struggle for justice and equity for all—resonates vividly against the backdrop of Chicago’s contemporary challenges.

Dr. King’s message could not be more clear, nor could it be more challenging today to fulfill. Witness the current polarized dialogue that passes for much of today’s political discourse, the broad-based mistrust of government institutions, and the legacy of inequity that has spurred impassioned protests by youth calling for immediate social change.

Chicago plays a unique role in Dr. King’s story, specifically his march against housing segregation in Marquette Park on August 5, 1966. He reflected on the Marquette Park March as “the first step on a 1,000 mile journey.”

A decade later, Marquette Park would be the site of American Nazi Party rallies, where fear and anxiety about African-American and other non-white families settling in the traditionally Lithuanian- and Irish-American neighborhood led to numerous, violent confrontations.

Contrast Marquette Park today, almost 50 years after Dr. King’s march: one of the most diverse communities on Chicago’s South Side. Latinos, African Americans, Arab Americans and other residents go about their daily activities of living, working and worshiping as neighbors. Rather than racial conflict, the problems that Marquette Park confronts today are the symptoms of inequity: high levels of poverty, unemployment, gang violence and the aftershock of the housing crisis.

The Inner-City Muslim Action Network (IMAN) has been a community anchor serving Marquette Park since 1997. According to Rami Nashashibi, IMAN’s executive director, “This community’s resilience is rooted in the diverse religious, ethnic and racial congregations, families and organizations coming together to work collectively towards real solutions to the community’s challenges.”

At his National Prayer Breakfast in Washington, D.C. on February 4, President Obama shared the story of one day in Nashashibi’s life, and one simple act of conviction.

“The day after the tragedy in San Bernadino happened, he took his three young children to a playground in Marquette Park neighborhood. While they were out, the time came for one of the five daily prayers that are essential to the Muslim tradition.

And on any other day, he told me, he would immediately put his rug out on the grass right there and pray. But that day, he paused. He feared any unwelcome attention he might attract to himself and his children.

And his seven year-old daughter asked him, ‘What are you doing, dad? Isn’t it time to pray?’

And he thought of all the times he had told her the story of the day that Dr. Martin Luther King Jr., and Rabbi Robert Marx and 700 other people marched to that very same park, enduring hatred and bigotry, dodging rocks and bottles, and hateful words in order to challenge Chicago housing segregation. And to ask America to live up to our highest ideals.

And so at that moment, drawing from the courage of men of different religions, of a different time, Rami refused to teach his children to be afraid. Instead he tought them to be a part of that legacy of faith and good conscience. ‘I want them to understand that sometimes faith will be tested,’ he told me. ‘And that sometimes we will be asked to show immense courage, like others have before us, to make out city, our country and our world a better reflection of all our ideals.’

And he put down his rug and he prayed.”

In this volatile climate, acting on individual convictions of justice is not the easy choice. Multiply a father’s act of courage by the number of times residents in our neighborhoods take three buses just to reach decent jobs or schools. By the number of times they publicly challenge the economic status quo, confront those who would deny their humanity, and build coalitions for change across racial, ethnic and religious boundaries.

The Chicago Community Trust believes in this spirit that is also Chicago’s spirit: the capacity of our residents to overcome our city’s troubled racial narrative. We have heard resoundingly from residents that they are eager to be part of a solution that heals human relations, builds bridges, writes a new and more inclusive Chicago story.

In October 2015, the Trust announced its long-term commitment to strategies that accelerate progress toward a prosperous, inclusive community for all. We will work in partnership with neighborhoods as well as civic, business, philanthropic and nonprofit communities to do the hard work of changing the social norms and structural policies that hold us back from being the First City.

We invite you to stand with your community and join the Trust as we build momentum to commemorate the 50th anniversary of Dr. King’s march in Marquette Park. The celebration on August 5-6, 2016—led by community organizations including IMAN—will include the dedication of Chicago’s first permanent memorial to Dr. King, a recreation of the historic Marquette Park March, a summit to engage citizens in discussion and more.

Through this moment of commemoration and reflection, we aim to energize and inspire communities across the city and country to remember Dr. King’s message and continue to work for true social justice in our communities.