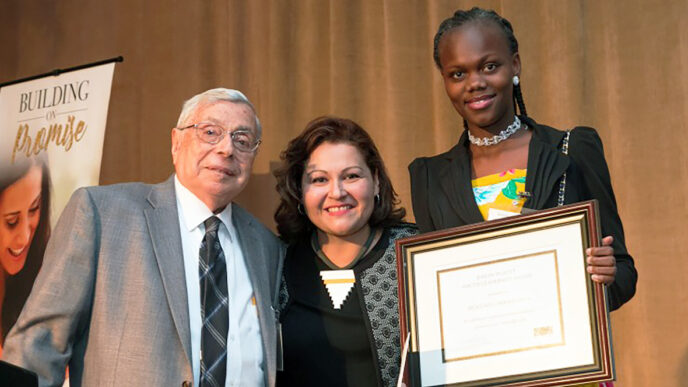 The Man Who Made the Chia Pet Gives Back

Joseph Pedott is the advertising legend behind the Chia Pet and the Clapper—two of the most iconic products in American pop culture. But he navigated a rough road on his way to remarkable success.

On his own as a teenager, Pedott received a helping hand from SGA Youth & Family Services, a Chicago nonprofit that helped set him on his path to success. To repay the favor, in 2012 Pedott opened a designated fund at The Chicago Community Trust to support SGA’s scholarship and educational programs, which help underprivileged high-school students attend and succeed in college.

And this spring, the tireless innovator stepped forward to lead the way again: this time with the Building on Promise Challenge Grant, announced at SGA’s annual benefit in May. This new grant from the Joseph Pedott Family Fund pledged a dollar-for-dollar match, up to $1 million, for all donations to SGA in the next year.

“I will never forget where I came from,” explains Pedott, president of Joseph Pedott Advertising & Marketing Inc. and Joseph Enterprises Inc. “SGA was my lifeline and continues to be a lifeline to youth living in Chicago’s most impoverished neighborhoods.”

Pedott knows from personal experience how unforeseen circumstances can seem daunting for a teenager without support. The Chicago native suffered from rheumatic fever at age 11 and spent years at a convalescent home in Bartlett. His mother died of a cerebral hemorrhage when he was 13. At 16, he ran away from home after a dispute with his father and moved into a YMCA on the North Side. His situation seemed bleak until SGA stepped in. Then known as Scholarship and Guidance, the organization provided Pedott with a counselor and money to help pay his living expenses.

“I was determined to get an education, but without that help from them, I’m not sure how I would have done it.”

Pedott’s advertising career took off once he finished high school. As a full-time student at the University of Illinois at Chicago, he and a fellow student started their ad agency producing television commercials for automotive and retail clients. Pedott used his share of the profits to pay his tuition. After graduating from college, he worked for an ad agency in Chicago for two years, then moved to San Francisco in 1958. He started his own firm, Joseph Pedott Advertising & Marketing, landing local and national accounts.

In the 1970s and 80s, Pedott came across the products that would propel him into the annals of pop culture history. He purchased the Chia Pet and developed the Clapper, perfecting the products and creating their memorable commercials and catchy jingles. Today the Chia Pet and the Clapper are considered American icons. The prototypes of both products are part of the Smithsonian Institution’s archives; their accompanying documents are in the Library of Congress.

Pedott, now in his 80s, credits his achievements in part to SGA, which helped him to finish high school and attend college. That’s why he has donated regularly to the nonprofit for years.

“What I’m trying to do is to help kids that have too much baggage on them and are highly motivated to get into college,” Pedott says. “They have the ability and the aptitude but are struggling because of circumstances beyond their control. I want to give these students with cream-of-the-crop potential a helping hand so that one day they can become leaders and then give back to SGA and the community.”

“I want to give these students with cream-of-the-crop potential a helping hand so that one day they can become leaders and then give back to SGA and the community.”

However, Pedott wanted to ensure that SGA would continue to receive his financial support not just today, but for years to come. Given the Trust’s strong roots in the region, grant making expertise and financial acumen, he selected the Trust to steward the Joseph Pedott Family Fund.

“The Trust is one of the oldest community foundations in the country and highly respected,” he says. “I find the Trust’s staff to be very professional and, most important, when I’m not around, I have confidence that the Trust will follow my directions.”