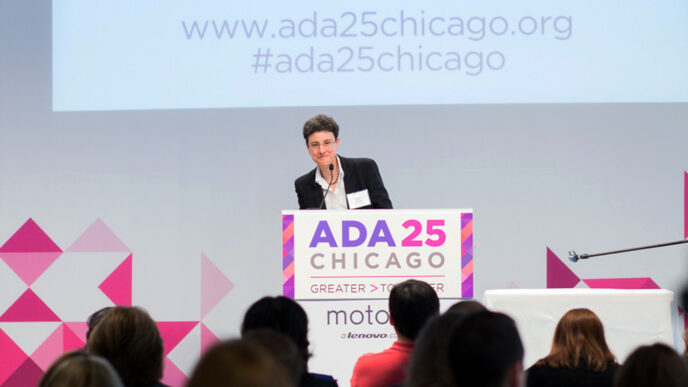 The Evolution of ADA 25 Advancing Leadership

Disability is a natural part of the human experience. Using the broad definition of disability under the Americans with Disabilities Act (ADA), one in five Americans—more than 56.7 million people—have a disability, some of which are visible and many of which, like learning and mental health disabilities, are non-apparent.

But although people with disabilities are our neighbors, coworkers, classmates, family and friends, they rarely play a visible leadership role at tables of power and influence in Chicago.

For the past two years, it’s been my honor to work with passionate leaders to start to change this imbalance, and add the missing dimension of diversity to Chicago’s civic landscape by initiating and incubating ADA 25 Advancing Leadership.

ADA 25 Advancing Leadership is committed to infusing disability into the Chicago region’s diverse leadership. This nationally-unique program grew out of ADA 25 Chicago. Two years ago, more than 200 organizations in the Chicago region came together under the banner of ADA 25 Chicago to celebrate and commit to the civil rights principles behind the ADA, equal opportunity, independent living, economic self-sufficiency and full participation, during its 25th anniversary.

Although people with disabilities are our neighbors, coworkers, classmates, family and friends, they rarely play a visible leadership role at tables of power and influence in Chicago. For the past two years, it’s been my honor to work with passionate leaders to start to change this.

Bringing the disability perspective to Chicago’s public and nonprofit committees, commissions, and boards means that together we can find innovative solutions to address the needs and incorporate the perspectives of all our region’s residents and will put people with disabilities at tables of power and influence.

Initiated with a class of 16 Fellows and 9 advisors in December 2015, Advancing Leadership has evolved to have three key components: a 10-month Leadership Institute program, a growing Members Network of leaders with disabilities, and a Civic Connections Project, which continues to grow in its size and reach.

The founding idea for the program came from Commissioner Karen Tamley of the Mayor’s Office for People with Disabilities, who wanted to create a “deeper bench” of leaders with disabilities to serve on task forces, boards, commissions, and other leadership roles. She envisioned a Chicago where people with disabilities were included at all kinds of tables of influence exerting their power and leading with a disability conscious lens.

Today, she co-chairs both the program’s Executive and Program Committees, comprised of business, civic, disability, and education leaders. Paulette Jagers of BMO Harris works with Commissioner Tamley as co-chair, following in the footsteps of initial co-chair Mark Ishaug of Thresholds, who continues to serve on the Executive Committee.

Advancing Leadership is growing thanks to the continued investment of donors led by The Chicago Community Trust and Exelon as well as BMO Harris, the Robert R. McCormick Foundation, Blue Cross Blue Shield of Illinois, Hyatt Hotels Foundation and Microsoft. The program recruits individuals across all types of disability and across all age groups, races, ethnicities, genders, professions, and geographies—highlighting the diversity of our region and the importance for residents at all levels to be and stay engaged. The ADA sought to break down barriers, and now Advancing Leadership seeks to break down the silos of civic engagement with an inclusive lens.

Today, we are 67 members strong. Since December 2015, we have made more than 110 connections to increase civic and professional engagement in Chicago, resulting in 34 civic and professional advancements and 33 speaking and leadership opportunities. Members are now serving on nonprofit committees, associates boards and boards of directors as well as public sector task forces and advisory boards. Members are mentoring each other, vibrant executive and program committees are providing leadership and direction, and most importantly, members are providing each other with a network of support while advancing in civic engagement and professional growth.

ADA 25 Advancing Leadership is a new kind of diversity initiative, one that encourages us to recognize disability as a key part of the region’s civic and professional life. We can’t do it without you. Please join us. We are always seeking opportunities to connect our members to board and committee opportunities. Please contact me if you have volunteer positions to fill.

In the near future, we’ll also ask for nominations and applications of emerging leaders with disabilities. Our website and Facebook page will include announcements of upcoming applications and opportunities to connect.

Together, we can make the Chicago region’s leadership the most diverse in the nation.