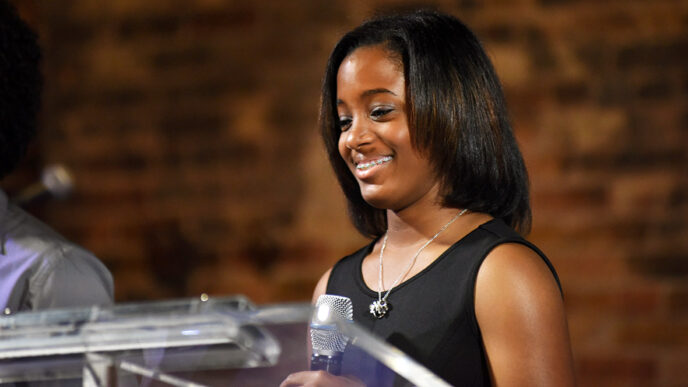 Surviving Against the Odds, She Finds Her Destiny in Service

The baby girl born July 4, 1998 was 3 1/2 months premature and weighed only 1 pound, 5 ounces. The doctor who attended the birth told the little girl’s mother her prospects weren’t good. The mother, Tamika Britten, prayed, and afterwards she said her baby would be all right—because she believed her daughter had a destiny to fulfill.

Seventeen years later, Destiny Watson is delivering on her mother’s prediction. The Homewood-Flossmoor High School senior is already a notable force for good in her south suburban Chicago community, and beyond.

[pullquote]Homewood-Flossmoor student Destiny Watson’s compassion for her bullies: “I want to put kindness out in the world”[/pullquote]

Watson’s father died when she was five, and she was bullied in elementary school, she says. But by seventh grade, after seeing a presentation by a national service group called Rachel’s Challenge, she vowed to make service the core of a more positive experience for herself and others going forward. She sought out groups like the local branch of Rachel’s Challenge, called Friends of Rachel, which has a chapter at her high school; and Operation Snowball, an Illinois organization that seeks to curb substance abuse among teens by encouraging leadership.

Destiny Watson and members of the student service group she founded at Homewood-Flossmoor High School, You Matter 2, share their stories.

They gave a shy girl “the opportunity to become a leader,” she says, and a more positive way of looking at some of the painful experiences she had been through in her past. Over the years, she has remained active in both those groups, rising into their leadership. She is involved in other service groups at school as well.

“I know what it means to be bullied, but that bully might be going through some things, too. I want to put that kindness out in the world,” Watson says.

Through service organizations like Rachel’s Challenge and Operation Snowball, Watson discovered a joy in giving back.

Last spring, in an annual event, the HFHS Friends of Rachel group hosted a group of kids from Glenwood Academy, a boarding school for at-risk children in Glenwood, for a special showing of the movie Home and a party with games, pizza, music, face-painting and a “red carpet” experience for the kids, in keeping with the theme for the day: “You Are a Star.” Not only did Watson attend the event—all the guests had their own “mentors” to make sure they had a great time—but she also helped organize it.

Watson says, “I love to get the joy of giving back. People don’t think they can make a big impact, but the littlest things you do can make an impact.”

Watson discovered last year that Free the Children, a Toronto-based service organization for young people, was bringing its We Day concert series to Illinois for the first time this past April. The concert was free to students who undertook ambitious local and global service projects, ordinarily through their schools. But she founded an independent group now called You Matter 2 and organized dozens of her classmates to collect food, sell “rafiki” friendship bracelets and raise money to help purchase goats for families in Africa.

Students in You Matter 2 made and sold friendship bracelets, using the profits to help purchase goats for families in Africa.

As a result of You Matter 2’s extraordinary success with these efforts, the group’s members were awarded not just free tickets to the We Day concert, but coveted seats up front on the main floor of the Allstate Arena. Another member of You Matter 2, Jade Greear, spoke to more than 15,000 people at the concert.

Retired Los Angeles Lakers basketball star Earvin “Magic” Johnson was so moved by Watson’s commitment to service that he volunteered to fund her education through his foundation. Image copyright Vito Amati, 2015

Watson will be looking at colleges this summer with her mother and stepfather, but she is also going to a leadership camp through Free the Children in Ontario, where “we’ll do a bunch of activities around how we can change the world,” Watson says.

Those are some big words—but coming from Watson, they sound like a mission statement. After all, she is a girl with a destiny.