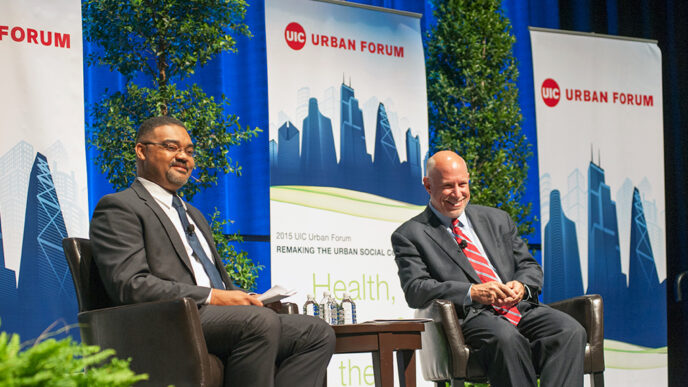 On a sunny morning last May, a lifelong resident of Chicago’s North Lawndale community stood on the corner of 18th Street and Hamlin Avenue, telling a group of public safety stakeholders about the role of the justice system in his personal story.

The 21-year-old had been shot seven times in a single incident on that street corner. While he lived to tell the tale, the physical and emotional repercussions of that day continued to haunt him many years later.

The assembled police officers, legislative staffers, social service providers and neighbors with criminal records listened in quiet reverence to this and other insights about how his traumatic home life and regular exposure to crime led him down a dangerous path.

“I wanted what I saw on the outside of people in my community, but I didn’t see the hurt on the inside,” he said.

This was one of the hundreds of powerful moments recently elicited by the Building Blocks Experiment—a project by the University of Illinois at Chicago’s Center for Public Safety and Justice to facilitate dialogue on the importance of building safer communities, while addressing systemic inequities in the justice system.

“I wanted what I saw on the outside of people in my community, but I didn’t see the hurt on the inside.”

The project was supported with funds from the 2015 Urban Forum Civic Engagement Action Project Award. A collaborative effort of The Chicago Community Trust and the UIC-based Institute for Policy and Civic Engagement, the prize was geared toward projects that dealt with the 2015 UIC Urban Forum’s theme of ‘Remaking the Urban Social Contract.’

The Building Blocks Experiment consisted of four half-day sessions between May and August of 2016. Through peace circles, shared meals, an action planning process and community-led tours of two West Side communities where public safety and mass incarceration are regularly at the forefront of civic conversations, organizers encouraged participants to envision a world in which individual and institutional responses to violence were restorative rather than punitive.

Peace circles are a deliberative dialogue model that emphasize healing and learning rather than finger pointing. Given the emotionally charged nature of the subject matter, and the divergent responsibilities of the organizations represented, their inclusion in the process was crucial.

“Being here today has allowed me to be better at what I do,” one police officer said.

The speaker at 18th and Hamlin, for example, was a member of the Alumni Association of Cook County Jail. He and several of his colleagues who had previously been incarcerated spoke at length with police officers throughout the process. They talked candidly about life in disinvested neighborhoods, and the responsibilities of citizens and public servants.

“Being here today has allowed me to be better at what I do,” said one police officer toward the end of the project’s first session.

Acknowledging that complex issues like public safety and social justice require solutions that draw on the collective wisdom of communities, organizers of the Building Blocks Experiment relied on deliberative dialogue to get at the core of the criminal justice issues facing Chicagoans.

Questions like these have no obvious answer—but by bringing together individuals with unique perspectives, the Building Blocks Experiment created space for individuals to learn from one another and take new, more comprehensive insights back to the organizations they represent.