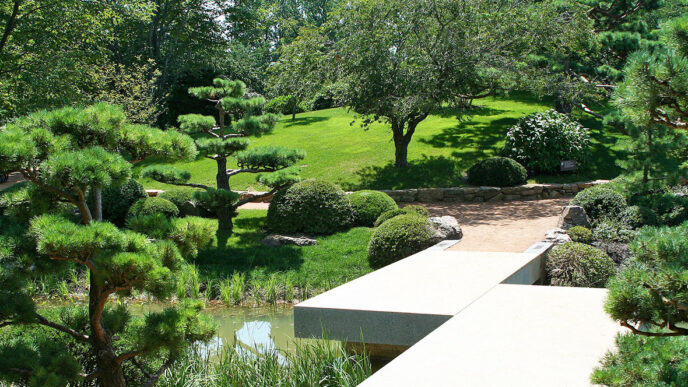 The Japanese garden at the Chicago Botanic Garden. CC BY-SA 2.5 via Wikimedia Commons||

The city of Chicago was incorporated in 1837 as “Urbs in Horto”: a “city in a garden.” In 1972, with the assistance of the Trust, the Chicago Botanic Garden was born—a garden to serve a growing metropolitan region.

The person most responsible for the establishment of the Chicago Botanic Garden was civic leader Mary Runnells. Working with James Brown IV, the Trust’s executive director from 1949 to 1972, Runnells articulated and funded a vision for a splendid botanic garden to benefit the entire metropolitan region.

In 1890, dedicated horticulturists had founded the Chicago Horticultural Society to promote an understanding of and appreciation for plants.

Mary Runnells, left, was a guiding spirit behind the formation of the Chicago Botanic Garden. Runnells, described by the Chicago Tribune as “a prominent Chicago-area hostess known for the large parties she gave,” was also active on a number of civic boards including the Lyric Opera and the Field Musuem.

At Brown’s urging, the Trust provided funding for the Chicago Horticultural Society to develop a master plan for a 300-acre tract of land at the northern edge of Cook County.

Fundraising to create the Chicago Botanic Garden was completed a year earlier than anticipated, thanks principally to Brown’s efforts. In 1972 the Garden opened, as a permanent site for the Chicago Horticultural Society to carry out its mission, encompassing collections, education and research.

A series of cascades at the Garden provide habitat to shade-loving perennials and other alpine plants. This Waterfall Garden was posthumously dedicated to James Brown IV for his support.

Runnells wrote to Hermon Dunlap Smith in a 1970 letter, “What [Brown] has done to implement and further the ideals of the Garden, I am sure the Board of the Trust, as well as the friend of the Botanic Garden, know full well.”

Mary Runnells’ wish for a tribute to Brown within the Garden was fulfilled—belatedly. In 1988 a Waterfall Garden was dedicated to James Brown by Bruce Newman, who succeeded Brown as the Trust’s executive director, and the chairman of its Executive Committee, Brooks McCormick.

Learn more about James Brown’s passion for gardening—which began as therapy to regain the use of his hands: A Mid-Century Champion for Equality, Green Space and New Media

Rumors persist that James Brown IV is secretly buried at the Chicago Botanic Garden in recognition of his pivotal role in its creation. There is insufficient evidence to support this flattering, but unsubstantiated, claim.