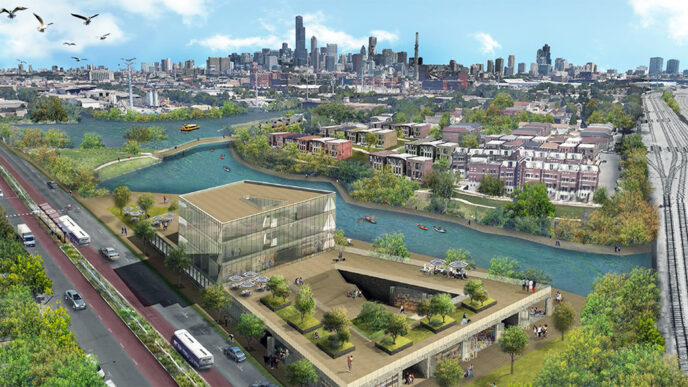 Our Great Rivers: Chicago’s Next Frontier

On August 17, at the Studio Gang-designed WMS Boathouse in Clark Park, Chicago Mayor Rahm Emanuel, The Chicago Community Trust’s president and CEO Terry Mazany and other civic, government and community leaders announced the release of the city’s first-ever vision for the entirety of its vast network of rivers and tributaries.

The Our Great Rivers Vision brings big thinking and new hope to the unrealized segments of the Chicago, Calumet and Des Plaines rivers and to 150 miles of land that abuts them.

Our Great Rivers is decidedly a vision—it is not a plan. Its overarching job is to remind us of the asset hidden in our midst and awaken our latent desire to nurture it. More specifically, the vision synthesizes the thoughts and ideas of more than 6,000 people into consensus parameters that will guide the prescriptive work of achieving the Our Great Rivers Vision: rivers that are inviting, productive and living.

In 2014, The Chicago Community Trust met with rivers advocates to think through long-term approaches to restoring ecological integrity to the system. Out of those conversations came the recognition that healthy rivers are inextricably linked to community ownership.

Re-introducing residents to their rivers through community and economic development, particularly in parts of the city in need of quality natural amenities, would unlock pent-up demand for the system. Access would then lead to regular interaction, surfacing new ideas about the rivers from both the market and the community. Over time, new uses would depend on a system that is environmentally sound.

New bridges and a wetland park in the river could unite Goose Island with the retail and residential district to its east—an example of the types of projects that would bring the Our Great Rivers vision to life. Rendering by Ross Barney Architects.

Fortunately, new ways to engage this former industrial workhorse had already begun. Ping Tom Park, the Chicago Riverwalk and the boathouses are a clear demonstration of urban rivers as a post-industrial asset. But expanding that prosperity throughout the system to three very different rivers in different parts of the city with different uses, demographics, histories and needs would require strategic, coordinated thinking. Thus, the City of Chicago was eager to bring broad-based, community-focused leadership to the idea of a system-wide vision.

In early 2015, the Trust and partners Joyce Foundation and ArcelorMittal would work with the City to select Metropolitan Planning Council as the principal administrator of a visioning process for the rivers. Friends of the Chicago River and the Chicago Metropolitan Agency for Planning would bring added capacity to the project.

Chicago is geographically large and socially complex. Despite communities of immense wealth and World City status, in large swaths of Chicago need is everywhere. Too often the market unfolds inequitably, and government is spread thin with perennially tight budgets.

In the face of these realities, The Chicago Community Trust supports ideas that hold promise for exponential impact. A high-functioning river system in Chicago is one of these ideas—a catalyst for sustainable development with a large geographic reach. Our Great Rivers elevates a massively underleveraged asset to a level on par with the award-winning 606, the booming Fulton Market and our prized lakefront.

As the Trust moves in a dynamic new direction with a strategic plan that calls for an economy defined by equity and sustainable communities across the region, it is essential to have vehicles that deliver these ideals. Our Great Rivers will help communities, government, policy leaders, developers and foundations literally see the rivers as a system, the interconnectedness of that system and how it interacts with the urban fabric. This high-level view prepares us to make coordinated and context-sensitive rivers-related investments in the neighborhoods.

Achieving the Our Great Rivers Vision will take decades and likely cost billions—a challenge worthy of enthusiastic embrace by current and future Chicagoans. The Vision is light on explicit implementation and funding details because at this stage it needs to be.

Healthy rivers are inextricably linked to community ownership. Our Great Rivers elevates a massively underleveraged asset to the level of the award-winning 606, the booming Fulton Market and our prized lakefront.

Unlike The 606, the lakefront and Fulton Market, the boundaries of the river system are meandering and complex. No single entity is responsible for the system, and a multitude of public and private uses occupy its banks. Achieving a vision for this urban asset will require a unique implementation and governance approach in Chicago.

With support from the Trust and other funders, Our Great Rivers partners are currently exploring these options. Until then, game-changing investments such as the Chicago Riverwalk motivate us to realize as much of Our Great Rivers Vision as possible.

To demonstrate our commitment to this community asset, The Chicago Community Trust has created the Our Great Rivers Fund, a mechanism to coordinate support from generous donors whose vision for the rivers is as bold as the 6,000 Chicagoans who created Our Great Rivers.