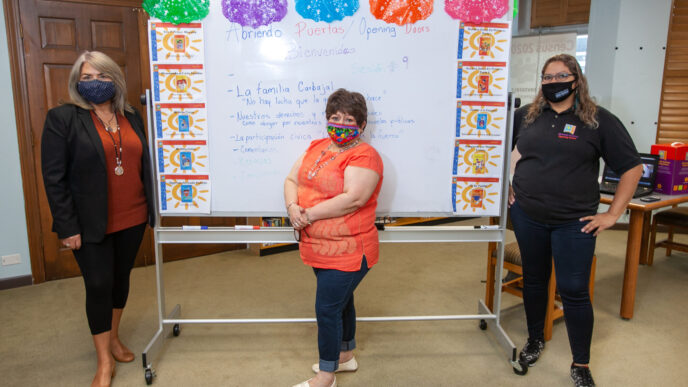 This past year, the Highwood Public Library launched Camino a la Escuela (“Path to School”) to teach an initial cohort of 16 Latinx families from Highwood how to help their preschoolers get ready for kindergarten. This new program was possible thanks to grant dollars from Nuestro Futuro, an affinity fund at The Chicago Community Trust dedicated to Latinx philanthropy.

“We’re preparing these parents to be the first teachers for their children,” says Carmen Patlan, library director. “We are very grateful to Nuestro Futuro.”

Research has shown that quality preschool preparation can make an impact on how children do in life, especially children from low-income households. Not every child goes to preschool, but parents can learn how to help their young children build the neccessary skills. For example, a parent can help a child learn numbers by counting the steps out loud when going upstairs; or identifying different colors while taking a walk.  According to Nora Barquin, grants coordinator at Highwood Public Library, parents should always be aware of opportunities to teach their kids.

Before the program even began, participating families got materials for craft projects and fun activities — games, puzzles, sidewalk chalk, slime — and made their own simple books.

Camino al Escuela classes kicked off in January with Zumbini, a licensed music and movement icebreaker; however, by mid-March the library closed in response to the COVID-19 pandemic. Money from that same Nuestro Futuro grant came to the rescue, allowing the library to pivot to online learning.

Classes for parents on topics like the importance of reading to children, and discussions of family goals and values, were originally planned to follow closely after Zumbini. Childcare would have been provided had the program rolled out at the library so the parents wouldn’t be distracted from the classes. But when the library shut down, and the program moved online, the more structured content was temporarily combined with Zumbini, or postponed altogether.

A silver lining to going virtual was that the program picked up a few families that hadn’t been able to come in person because of transportation issues, according to Patlan. The initial plan was to offer future iterations of the class online. She also notes that the pivot to virtual learning helped win over the trust families and actually increased their connection to the library.

“We felt we got stronger because of COVID,” said Patlan.

Another surprise was that whole households turned out for the Zoom Zumbini sessions, from babies to grandmothers.

“Music gets hold of everyone in the family,” Barquin said.

Highwood is situated next to Highland Park on the North Shore, one of the wealthiest areas in the nation. Nearly half of Highwood’s 5,200 residents are Latinx; many of them are immigrants. Patlan notes that the need for educational assistance is great.

“Highwood has pockets of extreme poverty,” she said.

She adds that because the surrounding area is so affluent, the needs of less-well-off residents tend be overlooked. The library has become a place to begin addressing those community needs.

Patlan, a veteran nonprofit strategist and fundraiser, has experience with community engagement programs, even winning an award for a program she developed while at the Waukegan Public Library. She has even replicated the successful Spanish-language GED test preparation class at Highwood that she started in Waukegan.

In addition, she has extended the Highwood library’s WiFi service outside its walls so residents who don’t have digital access in their homes can sit or stand outside to connect, even when the library is closed. Other programs include help with finding housing and jobs and with navigating the healthcare system, adult-education classes, and group and Individual tutoring for students.

In the year-and-a-half she’s been in Highwood, the library’s foot traffic has increased by 21%; its programming expanded 400%.

There’s no money in the library’s budget for any of this, Patlan says. However, she oversaw the creation of the Friends of the Highwood Library group in 2019 to advocate for the library and raise money for its efforts, especially around literacy. She credits the Nuestro Futuro grant with making it possible for the library to build its reputation as a trusted resource on literacy, strengthen its ties with regional nonprofits and attract the attention of other donors.

Highland Park High School (HPHS) counselor Pablo Alvarez, who is also a Moraine Township Trustee and chair of the township’s Latino Advisory Committee, has referred families with young children to the program. He has also spoken to parents about the importance of getting their children up to speed academically early on.

“The library is beneficial for making families feel supported, and also ensures that they have the resources to navigate the school process,” Alvarez said.