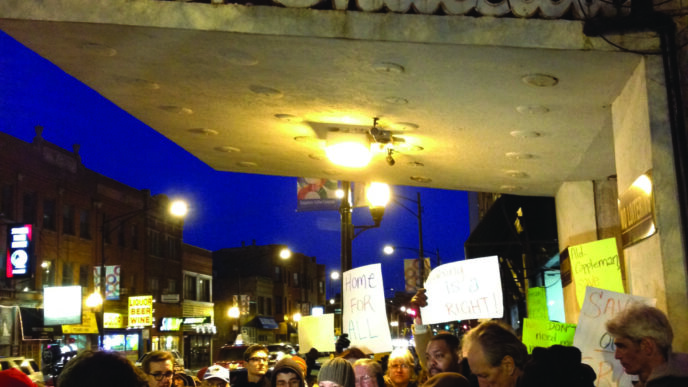 A recent story on NPR’s Weekend Edition highlighted how Hollywood, Florida has elected to address the issue of homelessness. The city orchestrated a deal to purchase a hotel that had been serving as a shelter for 200 homeless women and men. For 13 years the hotel, owned and managed by a homeless advocate, provided single-room occupancy (SRO) units on a sliding scale rate to individuals who had nowhere else to turn.

But as redevelopment has boomed and property values have begun to increase in this South Florida beach community, the hotel proved to be an obstacle for the city’s plans to develop the neighborhood, which is located along one of the city’s main commercial corridors. So the city purchased the property and closed it down, leaving those who had called it home with no place to go.

Living in a city with a strong support system for its homeless population, Chicagoans might hear this story and say, “Not in my city!” And they’d be right, thanks to the work of a coalition of advocacy organizations supported by the Trust. This coalition worked to push an ordinance through City Hall that preserves affordable single-room occupancy buildings in gentrifying areas. These buildings, long the target of for-profit developers, provide some of the city’s most vulnerable residents their only option for avoiding a night on the street.

The new ordinance requires that SRO building owners who want to sell their properties follow this process:

In lieu of this process, building owners can pay a preservation fee of $20,000 per unit in the building. Owners taking this route would also have to pay $10,600 in relocation assistance to individuals who have rented a unit for 32 consecutive days or more and will be displaced through the sale.