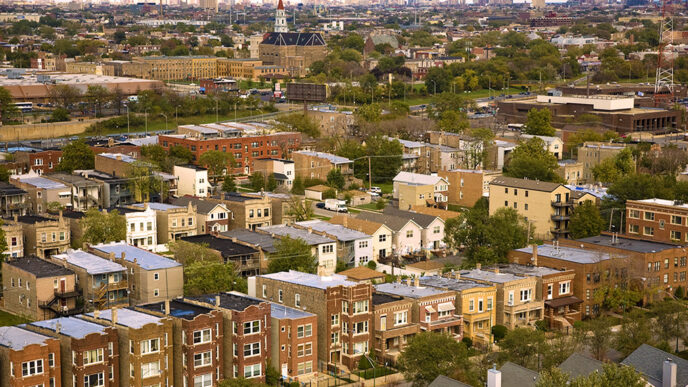 “More of our kids will have difficulties. They’re already behind before they get started.”

Located on Chicago’s west side, the North Lawndale neighborhood has a rich cultural history. In 1966, Martin Luther King Jr. moved to North Lawndale and established it as the northern base for the civil rights movement. Forty years later, the neighborhood spawned the Historic Chicago Greystone Initiative, a movement to preserve and highlight its characteristic architecture style.

However, North Lawndale residents have faced barriers to economic opportunity, health and wellbeing that continue to impact their lives today.

While Chicago’s median annual household income is $47,831, median income in North Lawndale is just $21,763. 25% of the neighborhood’s adults are unemployed.

Sinai Community Health Survey 2.0, a community-driven survey conducted in North Lawndale and eight other areas around the city, highlights the health inequities driven by these unjustly distributed social and economic resources, by historic disinvestment and racist housing policies, and by inequitable access to quality clinical care and educational opportunities.

Survey creators Sinai Urban Health Institute shared the results in a series of neighborhood forums, to spark discussion and build more understanding of the interrelated dynamics of health and community.

Their key findings from North Lawndale:

In the past year, 57% of North Lawndale households received food stamp benefits, and 30% of households accessed emergency food. Despite this, 37% of households were still food insecure—compared to a U.S. average of 13%.

From the forums: Conversations focused on the relationship among low household income, food insecurity and overall health. “Minimum wage makes it hard to afford to eat healthy,” said one resident. “It’s hard to stay healthy when you’re not sure where your next meal will come from.”

“When we think about health over the lifespan and across generations, the numbers on preterm birth and low birth weight in North Lawndale are striking. From birth, North Lawndale residents face challenges to achieving optimal health that are not seen in other communities.”

53% of adults in North Lawndale are obese—nearly double the national obesity rate of 29.5%. Of these, 13% consider themselves underweight or the right weight, while 73% tried to lose weight within the past year.

From the forums: Residents traced a connection between diet, exercise and obesity, and shed light on how their environment shapes the choices available. “There’s nowhere to buy healthy food,” one said. “You have to go on 2 or 3 buses to find vegetables”—a routine that’s out of reach for many. In fact, 57% of residents eat less than one serving of vegetables a day.

Healthy physical activity is also constrained by the neighborhood. “There’s fear [of exercising]—you don’t want to walk around because you don’t know what’s going to happen to you,” one forum participant shared. In survey responses, 16% of North Lawndale adults acknowledged feeling unsafe alone in their area during the daytime; 44% felt unsafe alone at night.

From the forums: Despite the prevalence of depression and PTSD, residents shared the view that mental health is misunderstood or stigmatized. “My community sort of puts a blind eye to ‘mental’ issues,” one said. Said another: “People would ask if I was depressed and I would say no even if I was.”

Residents also described how feelings of hopelessness or despair were reinforced by a lack of opportunity. As one forum participant said, “Not seeing businesses flourish and not having resources in the community makes you sad.”

Among mothers in North Lawndale, 27% have given birth to a low birth weight baby (defined as a baby weighing less than 5 pounds, 8 ounces). One-third have had a baby born prematurely, before 37 weeks.

From the forums: Babies with low birth weight are at increased risk for a wide range of complications, from infection to respiratory and neurologic problems. Community residents understood the lasting health challenges—as one said, “More of our kids will have difficulties. They’re already behind before they get started.”

One mother at the forum shared her own experience: “Both of my babies were small and I didn’t know why.” Others drew a connection to a lack of prenatal care—part of a larger pattern of systemic lack of resources: “Some young women are focusing on survival, moving from house to house.”

As SUHI epidemiologist Pam Roesch explained, “When we think about health over the lifespan and across generations, the numbers on preterm birth and low birth weight in North Lawndale are striking. From birth, North Lawndale residents face challenges to achieving optimal health that are not seen in other communities.”

From physical environment to clinical care and health behaviors: See more findings from the survey in the North Lawndale Community Health Profile infographic

This is the first in our series of neighborhood profiles exploring Sinai Community Health Survey 2.0 findings that health experts identify as issues of significance and concern. You can explore the complete results at sinaisurvey.org.