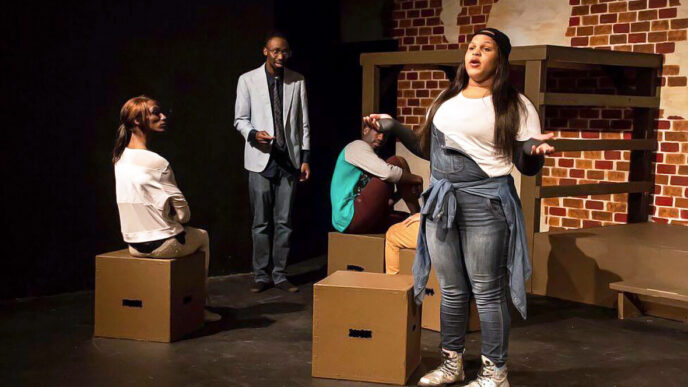 A trained psychotherapist and artist, Bonsai Bermudez fully integrates his time and talent to promote art as an agent for social change.

Bermudez is the co-founder and artistic director of the Youth Empowerment Performance Project (YEPP), an organization that aims to bring awareness to challenges faced by LGBTQ youth through theatrical performance.

“We use art as a healing tool, but also as a space for activism. We bring a lot of different social issues through our performances,” Bermudez says.

After his participation in On the Table last year, Bermudez has seen the benefits of relationship-building and mentorship through the face-to-face conversation.

“On the Table gave us the opportunity to build community relationships within a larger network. Knowing that this type of community engagement was happening across the city was powerful and representative of the strong connection that collective gathering can produce.”

“A highlight from On the Table for me was the opportunity to develop these relationships into different events and mentoring programs at YEPP. For example, two of the young people from YEPP are still connecting with the leaders they met at On the Table. So, there’s still a lot of mentoring happening which is so important for young people who have experienced homelessness. They often have a lack of mentors in their lives.”

Bermudez stresses the importance of intergenerational support for younger members of the YEPP community. “It was beautiful to see some more established community stakeholders participating during our On the Table. Young people who have suffered from homelessness in the past were able to have an open dialogue with other community members who have been pushing the conversation forward, but lacked the full perspective that young people have.”

Bonsai Bermudez (back, second from right) with members of his Youth Empowerment Performance Project ensemble and community activists at their On the Table event sharing intergenerational perspectives on LGBTQ youth homelessness. Around the common table, “young people shared their experiences in front of adults and stakeholders that actively listened to their stories and learned that it was okay to become vulnerable themselves.”

Since the On the Table conversation, participants of YEPP have performed nationally at the Creating Change conference in New York, and have also presented locally at the University of Illinois Chicago.

“We have been having more and more dialogues nationally about queer youth experiencing homelessness. In January, we got invited by the National LGBTQ Task Force in New York—a program that brings lots of activists around the country and internationally—to present at the closing performance for the entire conference. Around 5,000 people attended for their 30th anniversary. That, in particular, was an amazing opportunity to bring homelessness as an issue out in the open in a national platform.”

“We have also been invited to different public spaces to bring our workshops and continue the conversations. We recently participated in a panel at UIC Chicago. Our panel and performance was the first performance that was developed at UIC about youth experiencing homelessness. It was the perfect space because the event addressed how to prevent youth from not finishing their degree in college due to instability issues. We are pretty active about bringing changes to Chicago and beyond.”

“Two of the young people from YEPP are still connecting with the leaders they met at On the Table. So, there’s still a lot of mentoring happening which is so important for young people who have experienced homelessness. They often have a lack of mentors in their lives.”

On the Table has the ability to jumpstart relationship-building in a way that, according to Bermudez, provided a safe space for LGBTQ youth who sometimes lack an honest forum to express their ideas. “Because there were a lot of young people there, our conversation got more into the more vulnerable side of life in Chicago. Young people shared their experiences in front of adults and stakeholders that actively listened to their stories and learned that it was okay to become vulnerable themselves.”

“While we still brainstormed ideas, I would say that it was more about creating awareness and creating a vulnerable space. Some of the people even cried after listening to the young people. It was very emotionally moving.”

Bermudez sees On the Table as a moment of celebration for his community. “I think a lot of things have happened since our On the Table event, and I’d like to celebrate what we’ve done at YEPP so far. Relationships are so important for young people to continue growing, and moments like On the Table are a way to continue that kind of community engagement.”