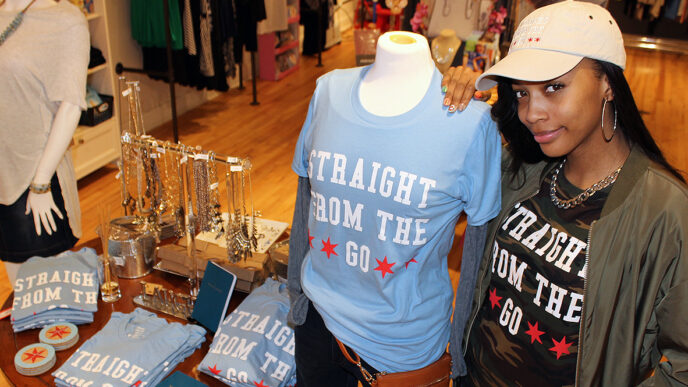 Violence in Chicago has shaped the city’s reputation around the world. It’s even inspired the title of director Spike Lee’s latest movie: Chi-Raq.

However, at least one teen refuses to allow this negative image to define Chicago, and more importantly the pride of its citizens. She is determined to tell outsiders that there is much to celebrate in her hometown.

“Everything good can come from Chicago,” says Raven Smith.

Smith, a 17-year-old National Honor Society student at Morgan Park High School, is proud to be from “The Go”—as in, Chica-Go. Her civic pride propelled her to transform the negative images associated with the city into something more positive.

Smith created the “Straight from the Go” movement, selling t-shirts inspired by the iconic colors and stars of the city’s flag. A portion of sales go to support anti-violence causes and to the 100 Club of Chicago, which offers support to families of fallen first responders.

On April 28, Smith shared her story on the WE Day Illinois stage in front of 15,000 other teens, challenging them to join her message of peace. We talked with her to learn more about how she is changing the narrative in the city she loves.

Q: Tell us about what inspired you to start Straight from the Go.

A: While driving to school one day I was looking around the city, thinking about the violence that occurs daily. I felt a huge obligation and responsibility to do something about it. Then it suddenly occurred to me: Straight From The Go—All Good Things Come From Chicago.

It was my dream to instill core values in all citizens to make a difference. I wanted to change Chicago’s image and the outlook and opinion of outsiders and tourists.

What I am doing is a business, a brand—but it’s also a campaign, a movement to change Chicago and the world. One voice that becomes the voice of hundreds, thousands, millions. One message that is clear has the ability to move mountains.

Q: Why do you think the movement has resonated with people?

A: I think people are trying to come together, to bring Chicago to a positive light. It is my belief that the majority of our citizens have heard the cries of our city, our nation, our world and they too are ready for change. Positive change. Everyone has been affected by crime or knows someone that has been.

Most Chicagoans are ready to foster the image that Chicago is home to many who believe in doing good things for others, who want to help their neighbors, who work hard and are making a difference in this world.

Raven Smith with Mayor Rahm Emanuel, holding one of her Straight From the Go line of t-shirts to boost local pride.

Q: Who has joined the Straight from the Go movement?

A: So many people have. Victims of violence, first responders, families of fallen officers, clergy, veterans and universities.

I am moved by my basketball team coach, Nick Irvin, who allowed the team to be the first to wear the slogan at the Proviso West Christmas Classic Tournament. A special shirt was made specifically for the team in the colors of black, orange and white. Now, so many different schools have requested the shirts.

Many people from different cities and states are wearing the shirt, too, including New York, California, Wyoming, Atlanta, Montana and San Francisco… The list goes on and on. It’s so exciting to see people wearing the shirts. It warms my heart. It reinforces that other people want to support the message and understand what’s going on—they know what I’m trying to convey to everyone.

Regardless of the struggle, the message is clear: together we can make a difference.

Q: How has what you’ve done impacted your school?

A: Teachers at my school found out about what I was doing and what my brand and slogan meant. They decided to implement it into a curriculum for next year’s freshmen. [The curriculum] will include peaceful things such as peaceful protests. They included “Straight from the GO” because it is a movement about peace.

My school also hosted its first annual “Straight from the Go” Peace Fest on April 13, 2016.

Everything good can come from Chicago. Regardless of the struggle, the message is clear: together we can make a difference.

Q: How has what you’ve done impacted your community?

A: The message has been heard on the news and radio. Write-ups have been in several newspapers, web releases and social media. The shirt is also being sold in several stores. It has demanded the attention of thousands.

In an effort to cover more ground, my peers have helped me by passing flyers and echoed the message as well. Communities around the city have invited me to speak at different venues and events. Moreover, it has helped build bridges and bonds. It has allowed others to join hands in peace and harmony.

Q: What advice would you give others who want to do good?

A: I encourage them to stand up for positive change. It doesn’t matter how old you are. Regardless of the struggle, the message is clear: together we can make a difference. We must embrace and find solutions so that the core values of Americans can truly penetrate every aspect of life.

Step out on faith and others will help you. Dr. Eugenia Orr, the chief of staff for WVON 1690 A.M., who just happened to be an alumni of my high school, helped me, along with so many others. They were driven by the message and have vowed to run the race along with me.