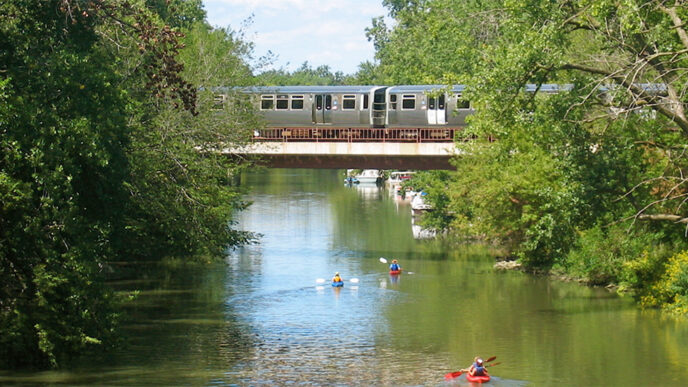 In August 2016, Chicago Mayor Rahm Emanuel, The Chicago Community Trust and other civic, government and community leaders publicly launched the Great Rivers Chicago: an initiative to inspire bold thinking for Chicago’s river system and the 155 miles of property that lines its banks.

The anchor of Great Rivers Chicago is Our Great Rivers, the first-ever vision for the entirety of Chicago’s vast network of rivers and tributaries.

After the public launch, the Trust issued a call for proposals from communities with ideas for their stretch of the river system. In September 2017, 10 of those ideas moved forward with funding support from the Trust.

Among them is the Northwest Trail Outdoor Museum, a partnership between the American Indian Center, Portage Park Neighborhood Association, Chicago Public Art Group and others, to create a “living, accessible, outdoor museum concept” along a network of trails that tells the story of Native Americans who settled what is today known as Chicago’s northwest side.

In the opposite corner of the city, the Little Village Environmental Justice Organization and the Southeast Environmental Task Force are exploring the public health implications of Chicago waterways in an effort to advocate for policies that attract sustainable economic and recreational uses to riverfront communities.

On the far South Side, the Forest Preserves of Cook County is working with Altgeld Gardens stakeholders, including residents and the Chicago Housing Authority, on a formal effort to connect the isolated community with the nearby natural amenities of Beaubien Woods, Flatfoot Lake and the Little Calumet River.

Each of these projects is remarkable in its own right. Taken together, they reinvent Chicago’s relationship with its river system.

Now, in its second year, Trust is again calling for community-led proposals that align with the Our Great Rivers Vision. Reflected in an improved 2018 Request for Proposals is feedback from key stakeholders, including 2017 grant recipients.

Each of these projects is remarkable in its own right. Taken together, they reinvent Chicago’s relationship with its river system.

Just like last year, the Trust is asking for proposals that integrate two or more of the Trust’s funding arenas of sustainable development, economic development, public health and arts & culture. The list of eligible communities has grown to include suburban municipalities that share a land or river border with the City of Chicago and have a river or tributary identified in the Our Great Rivers Vision.

Whether your project is well underway or nascent, we invite you to submit a proposal. Find complete details and begin your application for funding.