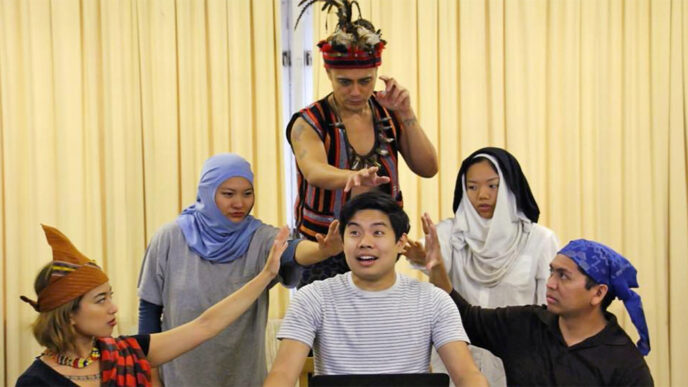 Civic Engagement, Healing and Justice in the Cultural Arena

The past and current anti-immigrant rhetoric is a constant reminder to integrate civic engagement in the Asian American community’s work of advancing justice and equality in the broader US society.

For the last 15 years, the Asian Giving Circle (AGC) has been keen in this regard, bringing new funding resources to the table so issues like immigration and human rights are given visibility. For example, in response to the threats facing immigrants, AGC for the last two years has focused its grant making to support community organizing and public policy advocacy, with preference to projects that encourage civic engagement among Asian Americans.

In 2018, CIRCA Pintig (CP) received a grant from AGC to advance its Arts for Healing and Justice Program, which explores theater and storytelling as spaces of deliberative community dialogue and collective healing. CP is a 27-year old Filipino American community theater company in Chicago. It is known for its tradition of engaging community members in examining their histories and struggles through a series of dramatic-educational workshops called “collective historicizing workshops.”

The agony of my mixed feelings of guilt, anger, hate, hopelessness and helplessness flashed dark memories as a scene in the musical gave tribute to my school mate who was tortured and killed with so much barbarity.

As explained by CP’s executive director, Angela Mascarenas, PhD, “Collective historicizing workshops consist of creative exercises that utilize elements of the integrated arts—drama, music, visual arts, movement and dance, creative writing. These exercises are geared to engage the ‘whole person’ in collective sharing and reflection, analysis and conversations around issues confronted by the participants themselves and the larger communities that they are part of. These workshops are ‘action oriented,’ participatory and experiential.”

I’ve seen the impact of the process in CP’s fall staging of Game of Trolls: Revisited. The musical looked into the horrors of President Marcos military dictatorship in the Philippines. The story touched on the character of authoritarian regimes, where dictators place no value to human lives, human rights and rule of law.

The Marcos regime instilled fear among the people through its murderous state security forces. Dissenters and political enemies were extrajudicially killed with impunity. Amnesty International reported that 70,000 people were incarcerated, 34,000 tortured, and 3,240 killed from 1972 to 1981. Like many dictators in the world, Marcos and his corrupt technocrats plundered the country’s resources in billions of dollars leaving the population impoverished and the economy underdeveloped.

Throughout the space and time of the musical, I had to take in the painful and horrifying experience of reliving the scary memories of surviving the daily life and death struggle attached to being a part of a student movement fighting the dictatorship and defending the human and democratic rights of the people. The agony of my mixed feelings of guilt, anger, hate, hopelessness and helplessness flashed dark memories as a scene in the musical gave tribute to my school mate who was tortured and killed with so much barbarity. My school mate was arrested without warrant, subjected to extreme violence that disfigured her face, and forced to drink muriatic acid to her death.

The musical pierced the complexity of humanity’s universal quest for a democratic and humane society. The protagonist’s reflection on his role as a paid troll of the new authoritarian figure in the Philippines distorting the brutal Marcos dictatorship gave hope to humanity’s triumph over evil.

Jerry Clarito at community arts organization CIRCA Pintig for a performance of Game of Trolls: Revisited, a musical exploring the brutalities of the Marcos dictatorship in the Philippines.

During the talkback session with the performers who also invested so much emotion in delivering their roles, the audience found collective reflection and healing. The sharing of the young performers to resist any form of dictatorship affirmed the courageous message of the historical-musical play.

I found myself in tears in reflecting and healing that part of the Filipino people’s history fighting the Marcos dictatorship. In this regard, investing in the work of CP is a matter of telling our stories so we can build power in the community. CP’s excellent performance has drawn the embrace of the audience. I thought then that we are the story of the people’s struggle. When the audience was invited to share their thoughts after the show, I blurted in tears of hope and inspiration, “Human liberation will only come from a united people. So we continue the struggle for human rights and democracy.”