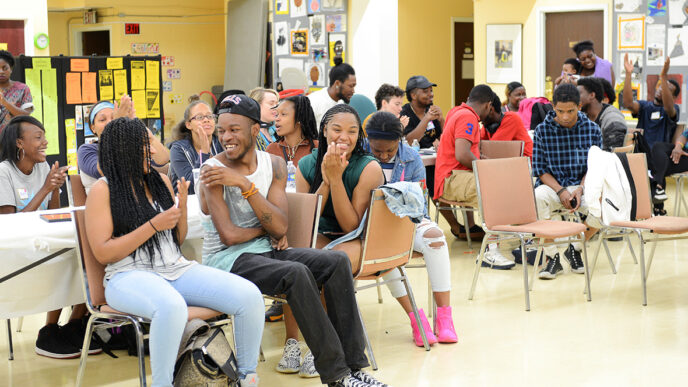 “Is society the reason why people are homeless?”

This was the question posed to a room full of homeless youth on a July afternoon at the Teen Living Programs Drop-In Resource Center. The young Chicagoans gathered together each had their own unique answer, using creative forms—poetry, rap, interactive exercises and facilitated group conversations—to share their personal stories.

[pullquote]Making moments of safety and joy for youth living with #homelessness, w/support from @TLPChicago + #ChiTrustActingUp[/pullquote]

The Couch Tour Party, organized by the Foundation for Community Change and TLP, sprouted from conversations started during a 2017 On the Table conversation. Those conversations inspired a submission to the Acting Up awards, where the idea was selected as a winner.

Funded by the Acting Up award and an Illinois Speaks grant from Illinois Humanities, what became The Couch Tour—so named because the host, Courvosier “Hunid Proof” Randolph, himself is currently living from couch to couch—is a series of events to serve as a party for homeless youth, as well as a space to share meaningful conversations about life in Chicago.

“In Chicago, 40,000 experience homelessness in one year. That, coupled with other challenges, takes a toll on people, families and society,” says Garrette Horne, executive director of the Foundation for Community Change, who spearheaded the conception of the event series.

So how do we minimize this toll? The Couch Tour takes on this battle by creating programming focused on bringing joy to the underserved homeless youth population of Chicago, as well as sparking conversations not only between case managers and organization leaders, but between the kids themselves.

Cara Ugolino, a case worker at TLP, marked the sharing of stories as one of the most important parts of this programming. Sharing stories provides homeless youth with the validation that comes with hearing that they are not alone in their struggle and that there are people, groups and organizations willing to help.

While there is rarely a shortage of organizations willing to help, there are few that master the nurturing of the youth so that they “pioneer change for themselves,” says Horne. At the Foundation for Community Change, the goal is to “build a person’s capacity to the point where we work ourselves out of a job.”