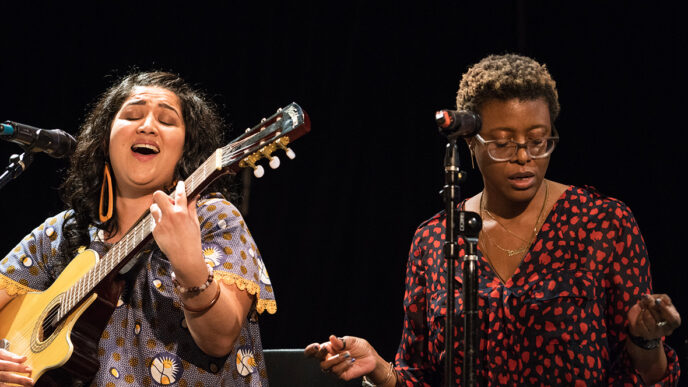 Maritza Cervantes and Krista Franklin perform a tribute to Gwendolyn Brooks and Sandra Cisneros at “Our Chicago”: an evening of poetry

Art, Activism & Resistance in ‘Our Chicago’

We gonna go in here, y’all!

We gonna go in here, y’all!

The a capella singing of avery r. young brought the roomful of chattering friends, family and arts-world professionals to a hush as, hands clapping and feet tapping in syncopated rhythm, he and his band led the group in a parade, away from the cocktail reception and into the auditorium of Pilsen’s National Museum of Mexican Art.

Created as part of Our Miss Brooks 100, a yearlong celebration of the centennial of Gwendolyn Brooks’ birth, “Our Chicago” explored the role of the literary arts in social movements. As the evening progressed it was clear that, true to the legacy of Miss Brooks, literature and poetry—and writers and poets—are at their most powerful when they help lead others into the light.

But how is it made manifest in daily practice? How do you keep creating work that aligns with your values in the face of indifference or incomprehension? How do you keep lifting other artists up?

The latter question resonated over the next twenty minutes, as each guest spoke to the generative power of art and the critical importance of using one’s own art to build a platform upon which other artists can stand.

Dr. Madhubuti, who has taught and mentored hundreds of writers in his storied career, cited Langston Hughes, Zora Neale Hurston and Malcolm X as mentors who had all inspired him. “I would never betray their hope for me,” he said, arguing passionately for the creation of independent black institutions.

“Art builds character. Art matters. And the people who run this bad boy”—by which he meant the world at large—“they don’t want art here at all.”

“To tell ourselves that making theater is an act of social justice is an act of vanity,” said Paz, wryly. But telling stories is itself a regenerative act. “We’re all exhausted by our resistance, by just surviving day to day.”

At Free Street, Paz strives to create a space where artists can practice building a better world. “We are in the business of rehearsing new ways of working together every day,” she said.

The creation of new ways of working together was rehearsed as well at Freedom Square—the North Lawndale site where, for forty-one days in the summer of 2016, activists and artists including Colón occupied the corner of Homan and Filmore in protest of police violence. And it’s happening on an ongoing basis at the Breathing Room, the Back of the Yards cultural events space established by the #LetUsBreathe Collective earlier this year.

Spaces like this that foster cultural activity in support of political action are key, said Colon. By going out into the world to work for justice with the tools of writing and creative expression in hand, she said, she ensures that “I go with more than just my rage and more than just my grief”—and she can teach others to do the same.

“How can we conduct ourselves in this space in a way that is counter to all of what is oppressive outside of this space?” Step inside the Breathing Room with this video from Free Spirit Media: Remixing the Art of Protest

In keeping with the theme of platform-building, Baker called on the assembled crowd to “revile the river”—a shout-out to her mother’s celebrated “The Sermon on the Warpland,” an invocation to seize the river of black history and effect change—by supporting independent art and artists. “Give $10, $50, cash, on your credit card, because that’s how we make it happen and thrive.”

After a performance by Maritza Cervantes and Krista Franklin, in a musical tribute to both Miss Brooks and Sandra Cisneros, the program closed with artist/playwright Ricardo Gamboa. “The revolution will be affirmative, and it will be gentle,” Gamoba declaimed, before delivering his own emotional tribute to women of color in the arts in the form of a story about “my favorite Mexican,” his abuela or grandmother.

Bringing it full circle, avery r. young and band concluded with a rendition of “Motherless Child” that brought the audience to its feet. It was a callback again to Miss Brooks, the literary mother of everyone in the room, who—through her teaching and mentorship of generations of poets—built the platform upon which everyone in the room now stood.