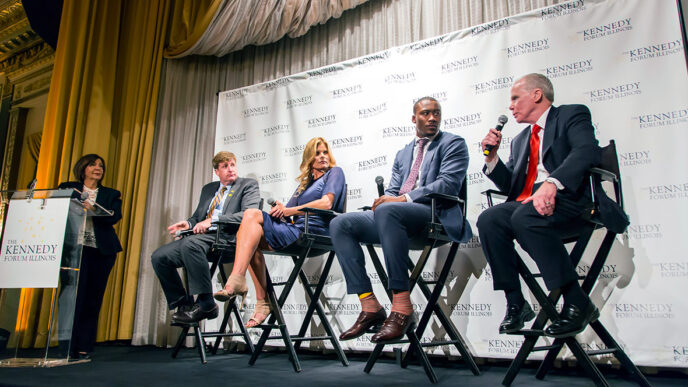 At a Kennedy Forum event

A Son’s Struggle Inspires a Movement for Mental Health Parity

Peter O’Brien’s only son died long before his time, felled at 32 by schizophrenia and health problems that resulted from medicating himself with alcohol. O’Brien found a way to use his family’s experience to draw attention to the damage that secrecy and shame can do to people who suffer from mental illness.

[pullquote]Breaking the stigma of mental illness: Peter O’Brien + the @KennedyForum IL work to change the conversation[/pullquote]

“The stigma is so powerful that mentally ill people don’t get the care that is out there,” O’Brien says. “People are ashamed. They don’t tell their caregivers about the symptoms they are experiencing.”

“You can’t treat somebody if you don’t know what’s affecting them.”

O’Brien has joined forces with Patrick Kennedy, a former congressman from Rhode Island and the son of the late U.S. Senator Ted Kennedy, to establish an affiliate of the Kennedy Forum on Mental Health and Addiction in Illinois. Kennedy founded the Forum in 2013 to help change the way mental health and addictions are addressed in America.

The O’Briens are a well-known Chicago family, the owners of O’Briens restaurants and of MADO Healthcare, a group of mental health recovery treatment facilities founded by Peter’s parents more than a half-century ago. Peter and his wife Mimi have three daughters; Peter Jr. was their only son.

PJ, as he was known, was diagnosed with schizophrenia at 20, after teenage years marked by slipping grades, troubling companions and evidence of marijuana use. When he came home after his first year of college, his behavior was so concerning that his family realized he needed psychiatric help.

Peter O’Brien speaks at a Kennedy Forum event beneath a photo of his son, PJ, who struggled with schizophrenia until his death at age 32. PJ’s life inspired O’Brien to team up with the Kennedy Forum “to break the stigma” surrounding mental health.

What came after the diagnosis was “12 horrendous years” for PJ, including 24 hospitalizations, as well as stints in jails and on the streets. His family stood by him through it all. PJ’s desire to avoid the label of “mental patient” often led him to abuse drugs and alcohol rather than seek treatment, O’Brien recalls. In 2012, PJ died of acute pancreatitis at his home in Decatur.

Just weeks later, Peter saw a Katie Couric television interview with Patrick Kennedy, who has been candid about his own struggles with mental illness and substance abuse. They were talking about an organization Kennedy had founded to promote mental health “parity”—treating mental illness in the same straightforward way our healthcare system addresses cancer, or a broken leg.

“[Kennedy] had the courage to confront it directly, and I wanted him to help me,” O’Brien said.

Soon after, with the support of Patrick Kennedy, Peter reached out to leaders in the community, business and civic sectors to form the Kennedy Forum in Illinois. The group has moved quickly to raise awareness of mental health issues like stigma, access and parity in healthcare plans.

Last May 12, the Kennedy Forum Illinois partnered with The Chicago Community Trust to sponsor “100 Conversations” on mental health issues as part of the On the Table initiative, which fostered thousands of dialogues that day about how to improve life for Chicago-area residents.

At Access Living, participants in an On the Table event organized by the Kennedy Forum discuss issues of mental health awareness and access to care. The Kennedy Forum organized 100 conversations around the state, from an on-air broadcast on WVON 1690 to a session for Chicago police officers.

Their discussions spanned the state from Springfield to Rockford, and studded Chicago and its suburbs, O’Brien says. Local media personality Robin Robinson hosted a radio conversation on WVON 1690 radio about mental health in the African-American community; Chicago Police Superintendent Garry McCarthy reached thousands of police officers with a session on mental health that was part of the department’s watch-change roll calls on May 12.

O’Brien says he is pleased to be helping lead the discussion of how better to treat mental illness in our state, and he is convinced that the first job in helping people like PJ is “to break the stigma.”

“I know this is the time to make a difference,” O’Brien says. “And I’m not going to stop until I have the feeling that we’re doing that.”