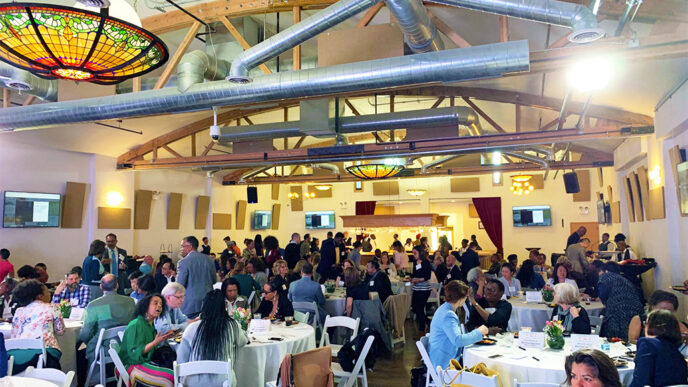 The Chicago Community Trust Releases On the Table 2015 Survey Results

CHICAGO – September 17, 2015 – The Chicago Community Trust today released a report from the University of Illinois at Chicago (UIC) Institute for Policy and Civic Engagement (IPCE) assessing the impact of On the Table 2015. The report outlines who participated in the second annual On the Table gatherings on May 12, 2015, key discussion themes, as well as outcomes and impacts on the region’s future civic engagement. The Trust also announced, in partnership with UIC and IPCE, a call for proposals for a 2015 Urban Forum Action Project.

“As the kickoff to The Chicago Community Trust’s Centennial, On the Table gathered more than 25,000 participants in nearly 2,000 mealtime conversations to discuss the region’s future and to inspire even more residents to get involved for the benefit of our community,” said Terry Mazany, president and CEO of The Chicago Community Trust. “We again asked IPCE to partner with us to assess the impact of these conversations and highlight the discussion themes, as well as the participants’ ideas and commitments to future civic engagement.”

The report was released as part of a discussion on civic engagement between Mazany and Joseph Hoereth, director of IPCE, at today’s UIC Urban Forum.

“Again this year, we had a response rate of above 25 percent, which is outstanding,” said Hoereth. “While we’re limited in what we can scientifically generalize from such a study, the data and analysis provide useful insight into the opinions, habits and backgrounds of the large number of civically engaged individuals who participated in On the Table 2015.”

During On the Table 2015, participants were asked to share the stories of how they are already making a difference and improving our communities, as well as to explore how they work collectively or independently to inspire others to do the same.

According to the study, respondents who reported raising an issue of concern in their conversation did so primarily around equity and social inclusion (29 percent), education and youth development (22 percent), and economic issues and poverty (20 percent). These issues also emerged as the most important problems facing our communities, as identified by respondents.

At the conclusion of their discussion, Mazany and Hoereth announced a partnership and funding opportunity for the 2015 Urban Forum Action Project, designed to engage residents directly in a project to develop healthy, sustainable and vibrant urban environments.

“The 2015 Urban Forum featured speakers on efforts to remake the social contract through initiatives or projects addressing health, energy and the environment,” said Mazany. “The Trust and IPCE are pleased to partner and support an initiative that intentionally draws residents into the process in meaningful ways.”

A project will be selected to receive a $25,000 award from funding provided by the Trust, as well as graduate research assistance from IPCE. Applications should be submitted online by the deadline of October 9, 2015. To learn more and submit an application, organizations are invited to contact IPCE at ipce.research@gmail.com or 312-355-0088.

To learn more, visit www.onthetable.com where you can view highlights and download the complete report.