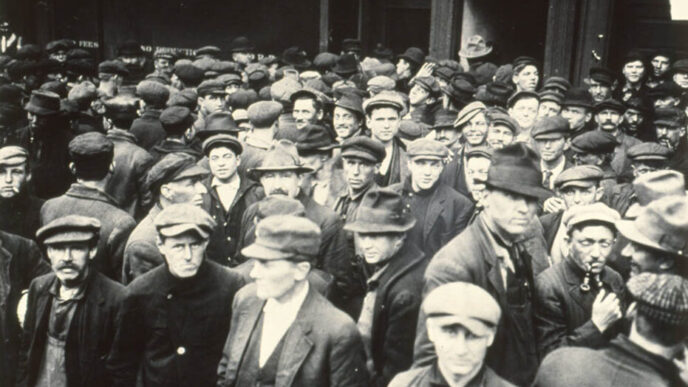 Unemployed men during the 1930s.

Why We Serve: Continuing a Tradition of Emergency Response in the Region

Spearheading the Chicago Community COVID-19 Response Fund follows The Chicago Community Trust’s century-long legacy of leadership and assistance to the region’s most vulnerable citizens at their greatest point of need. Standing in the gap during times of historic national crisis and economic uncertainty is what the Trust has always done.

In the 1930s during the height of the Great Depression, Trust executives developed relief funds that became models for federated giving in Chicago, and raised millions for citizens left devastated by the economic collapse. Former Illinois Governor Louis Emmerson appointed Trust Executive Director Frank Loomis to staff the Governor’s Commission on Unemployment and Relief in 1930. Steel magnate and philanthropist Edward Ryerson served as the commission’s vice-chair, and the collaboration of Loomis and Ryerson proved fortuitous. In its first campaign, the commission raised nearly $5 million — $70 million in today’s dollars — and funded organizations like the American Red Cross and the Salvation Army, ultimately benefitting more than 138,000 families.

Loomis subsequently appointed Ryerson to the Trust’s Executive Committee and together they established the Joint Emergency Relief Fund of Cook County in 1932, raising $10 million in its first drive. In 1934, the duo established the Community Fund, a precursor to today’s United Way of Metropolitan Chicago. Their transparency and accessibility inspired other civic leaders and philanthropists to establish similar campaigns.

Said Loomis at the time: “It has always been Community Trust policy that we should give personal service as well as grants of money.”

The Trust followed this ethos during the 2008 recession as well, ushering in another era of innovative programming and providing assistance at a critical point of need during a national crisis. From 2008 to 2010, the Trust supported basic needs while also helping human services providers develop business models to sustain their organizations. In 2008, the Trust also converted its annual appeal into the Unity Challenge, a campaign that raised $4 million to support basic human needs of the region’s most vulnerable residents. The Trust’s current Unity Fund is the legacy of the Unity Challenge, still supporting the work of nonprofits addressing residents’ basic human needs 12 years after its creation.

Similar to the Trust’s leadership role in the COVID-19 Response Fund, in 2009 the Trust was tapped to rally local foundations to assist Mayor Richard M. Daley’s civic efforts to assist Chicagoans during the recession. Former Trust President and CEO Terry Mazany led the Chicago Recovery Partnership, one of the nation’s most unique and comprehensive public-philanthropic partnerships. The Recovery Partnership connect-ed the City of Chicago with more than 50 foundation and corporate executives to secure more than $2 billion in federal grants from the American Recovery and Reinvestment Act (ARRA).

During this time the Trust also led foreclosure assistance efforts. In partnership with the Federal Reserve Bank of Chicago, the Trust invested $5 million in rescue loan pro-grams and facilitated $1.5 million in grants to organizations providing financial counseling.

“We are successful when we are connected with each other, when we listen and work together,” Mazany said. “To create more opportunities, we must be proximate to those without opportunity.”

Said the Trust’s current President and CEO Helene Gayle, “From the Great Depression to the Great Recession to the COVID-19 pandemic, we see the deep commitment of this city’s civic and business community to giving back. With their support, the Trust remains prepared and steadfast to meeting the critical needs of the region’s residents.”