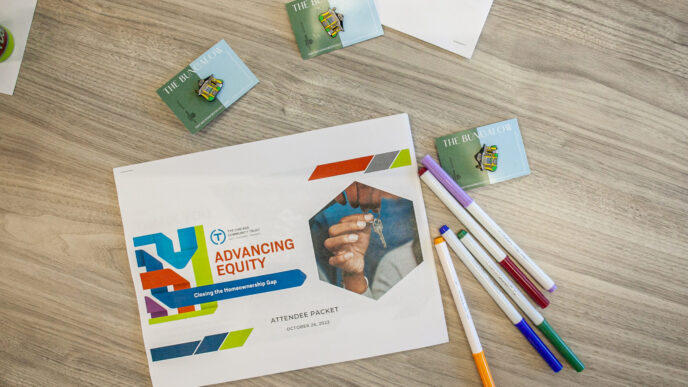 Advancing Equity: What is the Homeownership Gap?

Homeownership is one of the most important vehicles for building household wealth, creating a pathway for families to increase their economic security, and passing down generational wealth. However, a gap persists between Black, Latinx, and white households. In Chicago, 77 percent of white households own homes, compared to only 55 percent of Latinx households and 40 percent of Black households.

That is why efforts to address the homeownership gap are a crucial part of the Trust’s strategic focus on closing the racial and ethnic wealth gap in the Chicago region. The Protecting & Advancing Equitable Homeownership strategy, launched in 2020, makes grants to housing organizations, supports the work of Connecting Capital and Community (3C), and advocates for policy reforms that disrupt the pattern of segregation and disinvestment. It also includes activating the Trust’s role as a convener to bring people and organizations together to collaborate on solutions.

In October, the Trust launched Advancing Equity, a new ideas exchange series that brings stakeholders together – grant recipients, donors, policymakers, researchers, and residents— to dive deeper into topics connected to the wealth gap. The inaugural exchange is a three-part series on closing the homeownership gap that has three objectives: to explore the systemic issues that caused the region’s homeownership gap, understand the current obstacles Black and Latinx homeowners face to maintain their homes, and uplift potential solutions.

“By bringing together a diverse crowd of people from different sectors, experiences, and different levels of understanding about the homeownership gap, along with housing organizations and community stakeholders, we really felt like this particular conversation could bring greater awareness to this issue,” said Shandra Richardson, program director for strategic initiatives at the Trust.

In the first session, Tonika Johnson, creator of the Folded Map Project and Inequity for Sale, led a conversation about the homeownership gap in Englewood and how it fared compared to other Chicago communities. She also facilitated an exercise that asked participants to share how much they paid for their homes or currently pay in rent and how they came to live in their neighborhood. Then, everyone marked the location of their homes on a map of Chicago to underscore the differences between various communities.

In addition, Maria Krysan, professor of sociology at the University of Illinois Chicago, discussed Chicago’s historical and ongoing issues connected to residential segregation. Mary Ellen Guest, executive director of the Chicago Bungalow Association, contrasted the financial challenges South Side bungalow homeowners go through to maintain their homes with the experiences of North Side bungalow owners. And Amber Hendley, researcher and economist at Woodstock Institute, shared data on the stark differences Black and white homeowners face, including disparities in loan costs and property values.

According to Richardson, the first exchange was an eye-opener for many participants, with some noting how the map exercise led by Johnson helped them better understand how factors like where you live contribute to homeownership inequities.

“We had people come out that day and say, ‘I can no longer unsee housing segregation on Chicago’s map,’” she said. “There was a sense that while we may not all be experiencing the same pain and issues, this impacts all of us.”

The next Advancing Equity: Closing the Homeownership Gap idea exchange session will be on January 31. Attendees will engage in an exercise to co-create solutions to overcome the barriers prospective and existing Black and Latinx homeowners face. A third exchange on developing action plans will take place in March.