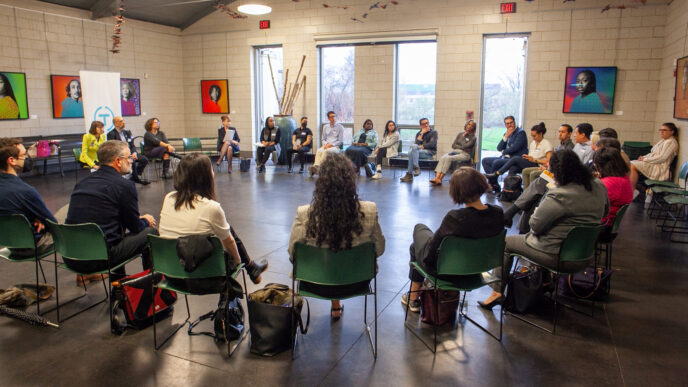 Homeownership is the single largest source of household wealth in the Chicago region, and it also plays an important role in building flourishing neighborhoods. However, the benefits of homeownership are not equally enjoyed by all. Historically and to this day, Chicago’s Black and Latinx families have experienced barriers that result in disproportionately lower homeownership rates than white families.

Because homeownership is so essential to increasing household assets, expanding access to it is a core part of the Trust’s strategy to close the region’s racial and ethnic wealth gap. Across Chicago, there are many nonprofits, funders, corporations, government agencies, and residents dedicated to advancing this goal. What would it take to bring a cross section of these players together, with a focus on a specific neighborhood, to leverage their collective strengths and holistically address racial barriers to homeownership?

That’s precisely what Connecting Capital and Community (3C) aims to do. Launched in April 2022, 3C is a three-year partnership led by the Trust with an initial $1.95 million commitment from JPMorgan Chase and implementation support from the Center for Community Investment. It’s part of a national initiative that seeks to increase equitable housing opportunities and strengthen local investment ecosystems in six cities: Chicago, Washington, D.C., Los Angeles, Miami, New Orleans, and Seattle.

In Chicago, 3C’s approach draws on our region’s unique strengths: multi-sector collaboration and community engagement. “The inequities 3C aims to address are complex, multi-layered, and structural, so our solutions must be as well,” said Lynnette McRae, Program Director for 3C. “To effect change, we need everyone at the table, from the developer to the homebuyer to the City of Chicago.”

3C’s diverse network includes residents, community organizations, and partners from the private and public sectors. Over the next three years, this team will utilize 3C funding to develop and test innovative housing solutions with the hope of identifying viable models that can be scaled across other communities. Strategies will be piloted in two neighborhoods, East Garfield Park and Humboldt Park. Some of the concepts include:

To ensure every aspect of 3C reflects the needs and interests of residents, the network includes community groups such as the Garfield Park Community Council and the Puerto Rican Agenda of Chicago.

According to La Shone Kelly, Director of Housing for the Garfield Park Community Council, the need for quality, affordable housing is top of mind for community members in this West Side neighborhood, which has fought for years to balance revitalization with avoiding displacement of longtime residents. “We welcome the opportunity to collaborate on the 3C initiative as an additional solution to open a path to homeownership by reviving vacant and abandoned properties,” Kelly says.

Jessie Fuentes, Educational Leadership Co-Chair for the Puerto Rican Agenda of Chicago, highlights the game-changing role homeownership plays in building generational wealth. “The Puerto Rican Agenda is pleased to be part of 3C because owning a home is a critical way for families to create wealth and pass it down to the next generation. It opens up doors to opportunity for future descendants and helps strengthen the overall community.”

Through the work of groups like Kelly’s and Fuentes’s, East Garfield Park and Humboldt Park have already developed community plans and coordinated key investments in local infrastructure and economic development. 3C’s intention is to build on those efforts—rather than start from scratch—by providing the network and support that will help partners take innovative ideas from concept to reality.

“Communities often have great ideas that never make it past the concept stage due to lack of sufficient resources,” said McRae. “The aim of 3C is not to supplant what communities are already doing, but to leverage public, private, and philanthropic funds to help them realize their visions for homeownership and wealth building opportunities for existing residents. Our philanthropic capital has the flexibility to be the spark that helps communities innovate toward a greater impact.”