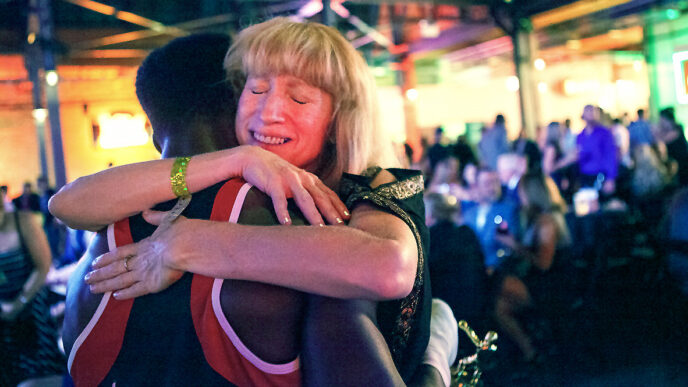 Professional boxers and players from the Chicago Cubs were in the house on September 2 for “Respect the Main Event,” a charity event hosted by Cubs manager Joe Maddon and his Respect 90 Foundation. But the real stars of the evening were members of the Crushers Club, a youth boxing club opened by Sally Hazelgrove in 2013.

Crushers Club was formed after Hazelgrove asked the kids she met on the street corners in Chicago’s Englewood neighborhood, “What’s something you would like that you don’t have access to, and would get you off the block?” Their number-one response: Boxing.

A young boxer throws a powerful left during a bout at “Respect the Main Event,” a fundraising event for Englewood’s Crushers Club.

Hazelgrove founded the club on four tenets: ownership, discipline, respect and love. She told the kids at the start, “I’m going to build something and put you in charge.” And she’s reinforced this principle of community ownership again and again, reminding members that “they alone own their actions and they alone own their victories.”

Her commitment to those principles in Crushers Club is what got Joe Maddon’s attention when he was looking for youth programs in Chicago to support. Chicago Cubs director of community affairs Connie Falcone says of Hazelgrove, “Once you’ve talked to [her] you’re hooked. She’s very authentic, and I think it shows in everything she’s doing. These kids understand that.” Falcone recognized at once that Hazelgrove’s passion and authenticity “would resonate with Joe.”

Hazelgrove introduces one of the evening’s champion fighters to Cubs manager Joe Maddon, whose Respect 90 Foundation hosted the event.

Two members of the Crushers Club face off in the ring. In addition to boxing skills, young fighters in the Club learn to live its four founding values: ownership, discipline, respect and love.

Chicago Cubs third baseman Kris Bryant watches the main event ringside. With support from the Cubs and other funders, the Crushers Club aims to “dramatically change the landscape of justice-involved youth.”

Hazelgrove shares a moment with Esther Solano of Epic Boxing & Fitness. Her founding commitment at the Club was to show love and respect to everyone who walks through its doors.

In a community often associated with violence and poverty, Crushers Club is committed to showing love, support and respect to everyone who walks through its doors. It’s drawn the attention of philanthropic leaders such as Maddon, and more recently the Juvenile Justice Department, which has partnered with Crushers Club since June of this year.

Hazelgrove says of the partnerships, “I feel like this is something that could dramatically change the landscape of justice-involved youth. [We can] stop wasting taxpayer money, [spending] $90,000 per year to incarcerate a youth, versus $5,000 per year to redirect them.”

All through the evening at “Respect the Main Event,” Hazelgrove’s optimism and energy prove infectious for the young athletes, families and volunteers. Through its culture of support and mutual respect, the Crushers Club’s effects will be felt in their lives for years to come.