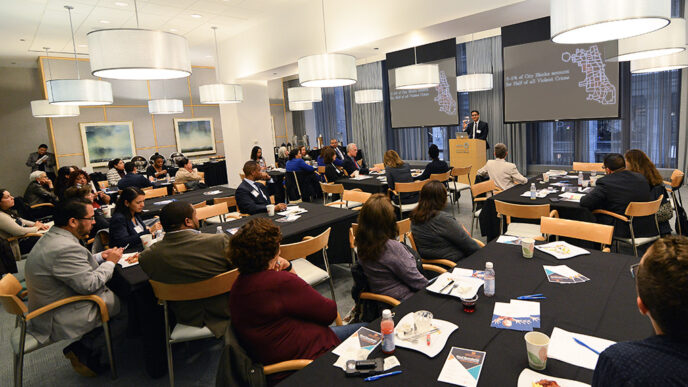 Why Ward Mapping Means Life or Death in Latino Chicago

On October 12, Nuestro Futuro hosted a provocative and compelling discussion with Robert Vargas, director of the Violence, Law and Politics Lab at the University of Chicago, about his 2016 work Wounded City: Violent Turf Wars in a Chicago Barrio.

Hosted by BMO Harris, the breakfast presentation drew about 60 of Nuestro Futuro’s supporters for an exploration of the book’s central question: Why is violence concentrated on some blocks over others?

Vargas’ research found that only 3-5% of Chicago city blocks account for half of all violent crime. His book attempts to explain neighborhood violence as an outcome of turf wars—between gangs and police, and between democratic and independent political leadership—which undermine efforts to curtail and prevent further violence.

Little Village was his case study, shaped by three years of on-the-ground research and analysis of historical and statistical data. Even if you think you know Little Village, and you agree that gerrymandered ward boundaries fragment communities, Wounded City shows how ward fragmentation leads to competition for resources and how competition fuels violence.

But rather than look at the individual actors in violence, Vargas looks at the relationships among gang members, police, nonprofits, aldermen and the Mayor’s office to show how those relationships prevent violence on some blocks—but spark it on others.

Vargas argues that in order to understand the violence that plagues certain communities, in this case the east part of Little Village, we need to look at the consequences of competition among the various actors, which includes the competition over resource distribution in relation to ward boundaries.

Even if you think you know Little Village, and you agree that gerrymandered ward boundaries fragment communities, Wounded City shows how ward fragmentation leads to competition for resources—and how competition fuels violence.

While we normally associate turf wars and outcomes of violence with gangs, Vargas looks to political gerrymandering as another equally important turf war that also has an outcome of concentrated violence.

Vargas showed how ward boundaries changed over 40 years in several of Chicago’s most densely populated Latino and African-American wards compared to the city’s most densely populated Caucasian wards. While Lincoln Park, Bridgeport, Jefferson Park and Lakeview barely if ever changed their ward boundaries over 40 years, the boundaries of east Little Village, Austin, Englewood and Roseland shifted and undulated like a video game.

This was one of Vargas’ most compelling arguments because the accepted narrative is to blame the residents for the violence in their neighborhoods. But Vargas challenges us to look “at the political structures that inhibit or support collective action to address violence.”

It was fascinating and worrisome to learn that the majority of Little Village community organizations are concentrated in the western part of the 22nd Ward, which has undergone little ward gerrymandering, while the east side, east of Marshall Boulevard, suffers from a dearth of resources but an overabundance of gang violence.

It was fascinating and worrisome to learn that the majority of 22nd Ward community organizations are concentrated in the western part, which has undergone little gerrymandering, while the east side suffers from a dearth of resources—and an overabundance of gang violence.

Vargas’ research highlights the need for the city to look at and rethink its responsibility to help. As stakeholders we cannot just focus on police and gangs—we have to look at the competition created by political turf wars and how that perpetuates violence.

Funders are currently supporting efforts to break the cycle of violence by supporting the development of strong workforce programs for the hardest to reach individuals. They are also supporting efforts to reform the police department and to build the capacity of organizations and communities to address violence in ways they determine best. But how funders insert themselves into the political turf war discussion needs to be addressed. Vargas’ research makes a strong argument for how and why to do that.

What can we do?

There are a number of actions that communities and local nonprofits can take to help change the current narrative.

Nonprofits:
Assess your role in the current space, to determine your opportunity for greatest impact.

One of the many reasons Nuestro Futuro was created was to inspire donors to work together to make a difference in the lives of Latinos. While fundraising has enabled NF to award grants to Latino-managed and Latino-serving organizations, its added value has always been educational programs like this event, building awareness on what and who makes up the amazing cultural fabric of the Chicago area’s Latino communities and informing how philanthropy can address the communities’ needs.

Written with support from Angel Gutierrez, vice president of community development and outreach services for Catholic Charities of the Archdiocese of Chicago and a member of the steering committee for Nuestro Futuro.