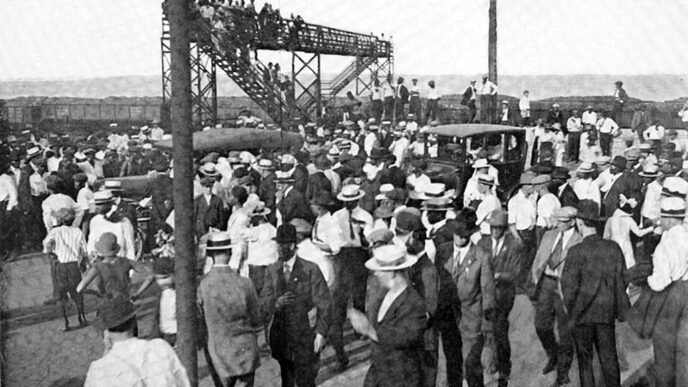 When the Solution Becomes the Problem: The Legacy of the 1919 Race Riots

On July 27th, our city marks 100 years since Eugene Williams, a young Black man, was killed after his raft drifted into an area of water that was unofficially restricted to whites. That young man became a symbol to people on both sides of the racial divide.

To the people who pummeled him with rocks, he was not a young man trying to escape the heat on a 96-degree Sunday afternoon, but rather an embodiment of a future they were not willing to accept. They wanted to send him back over that imaginary line in the water to where he “belonged.” To the Black people in the city, he was a symbol of limits and threats faced if they dare crossed their “pre-determined” path. Following his murder, riots ensued and over the course of seven days, an additional 38 people were killed and 537 injured.

As a result of these riots, what once was an imaginary line became codified in law as it was determined that the only real way to prevent this from happening again was to segregate the races. Though this separation is no longer mandated by our government, it continues to shape Chicago 100 years later. The “solution” of segregation was inspired by racism and fueled a system of inequity that continues today.

While the “Red Line” no longer exists on a map, discriminatory policies, predatory practices, overt racism and differential life outcomes persist in eerie consistency with where those red lines use to be.

The reality though is that the impact of segregation affects us all. According to The Cost of Segregation study, commissioned by Metropolitan Planning Council (MPC) and the Urban Institute, “segregation is not only an issue in low-income communities or communities of color.”

If we continue on our current course, there will be another generation in a hundred years or so having a conversation about how, when given the choice, we failed to fight for our city and our values.

The line, invisible or not, separating us has a devastating effect on everyone. MPC’s report also estimates that the Chicago region’s gross domestic product would add $8 billion if the region was less segregated. Similarly, the Chicago Metropolitan Agency for Planning (CMAP) cautioned in its regional plan, ON TO 2050, that metropolitan Chicago’s economic progress has stalled, lagging well behind growth in other big American cities, and a major reason is the economic disparity here between whites and people of color, especially African Americans.

To be clear, there have been decades-long fights from brave men and women locally and nationally on the frontlines of the civil rights movement who have fought the systems holding people of color back. While we are further along thanks to their sacrifice, there is systematic work that remains to be done to bring about transformative progress.

A new “solution” that would benefit all is dependent upon our collective agreement that every resident should have access to equitable opportunities to not just live, but thrive. While this happens to be the moral and ethical path, it is also the only effective practical path if we want our region to prosper. If substantial parts of our city are being held behind the line, it ultimately affects all of us.

This road towards equity is reliant on investments in neighborhoods that have long been disinvested in and advancing initiatives and policies that tackle systemic discrimination. Only then can we begin to repair the legacy of Eugene Williams’ death and what came after. If we continue on our current course, there will be another generation in a hundred years or so having a conversation about how, when given the choice, we failed to fight for our city and our values.

I hope we use this moment to be clear-eyed and honest about the realities that separate us, but equally the commonalities that can unite as we look to building a community of people committed to a shared prosperity for all.