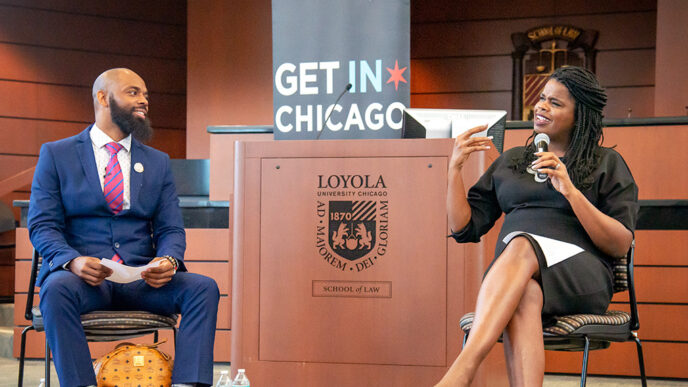 Activist Demetrius Nash in conversation with Cook County State's Attorney Kim Foxx at a symposium on ending youth violence hosted by Get IN Chicago.|||||

We Can Tell Who’s at Risk of Youth Violence. Can We Reach Them?

Stopping the youth violence that plagues some of our communities can seem like an insurmountable challenge. However, research shows that the number of young people aged 13 to 18 at acutely high risk for violence is in fact just 2,000 to 4,000 individuals.

Understanding these numbers, identifying the young people at risk and coordinating significant and centralized case management that ensures they get the services they need: these are the critical steps toward turning the tide of youth violence.

That was a key message from the daylong “Building Stronger Systems for Youth” symposium presented by Get IN Chicago on July 25 at the Loyola University School of Law.

While stopping youth violence can seem like an insurmountable challenge, research shows that only about 2,000 to 4,000 young people in Chicago are likely to commit a violent act. Identifying those individuals, and taking steps to reach them with services, was the focus of Get IN Chicago’s daylong symposium at Loyola University.

Social service professionals in community-based organizations and large public systems like juvenile probation and child welfare urgently need to identify and intervene with those specific young people who are at “acutely high risk” of committing violence, said Dr. Toni Irving, Get IN Chicago’s executive director. An affiliate of The Chicago Community Trust, Get IN Chicago is a youth anti-violence fund addressing the underlying, systemic issues that lead to youth violence through evidence-based community programs.

“We need to engage the right youth to the extent that they need interventions,” Irving said.

Irving explained how careful mining of data has shown that many of the resources deployed in hopes of changing the course of those young people’s lives go instead to children who are economically disadvantaged—and perhaps even at risk of becoming involved in violence down the line—but not in imminent danger of committing violence.

Dr. Toni Irving, executive director of Get IN Chicago, spoke about the role data can play in identifying the specific young people who are at “acutely high risk” of committing violence—and in determining whether support services are reaching them. ‘We need to engage the right youth to the extent that they need interventions,” Irving said.

Statistically, “acutely high-risk” young people have been found to have three or more risk factors for committing violent crimes, Irving said. These high risk factors include: multiple arrests; a history of trauma, mental health issues, neglect, abuse or substance abuse; gang involvement; a parent who is or has been incarcerated; and significant difficulties in school, including Individualized Education Programs (IEPs) which reference cognitive impairment or emotional/behavioral disorders.

Many young people living with these risk factors are not involved in school, teen sports or community programs where resources are ordinarily made available.

A few major themes emerged from the symposium’s expert panelists and featured speakers:

In two panel discussions, experts from public and nonprofit agencies shared their experience working directly with youth at risk of being involved in violence. Said Cliff Nellis, executive director of the Lawndale Christian Legal Center (right), “These are young, good people. You would love them if you knew them.”

Launched in 2013 as a five-year initiative, Get IN Chicago has invested millions of dollars in organizations that work in seven areas on the South and West Sides with high rates of gun violence. Now nearing the end of that time frame, Irving said, its leaders are figuring out the fund’s next steps.

Two panel discussions at the symposium featured representatives of public, academic and nonprofit agencies that work with disadvantaged youth in Chicago. Panelists agreed that if identifying and then reaching the kids most at risk of committing violence is difficult, working with them is not easy, either.

Still, said Cliff Nellis, executive director of the Lawndale Christian Legal Center, “These are young, good people. You would love them if you knew them.”

Mark Werner, deputy chief of Cook County Juvenile Probation and Court Services, explained that his probation officers go out to meet their clients in the communities where they live. He and several other panelists reiterated that the best place for young people to receive therapy, mentoring and other services is directly in their own neighborhoods. Otherwise, they face insurmountable barriers to accessing support: crossing dangerous gang boundaries; taking public transportation they can’t afford; getting themselves organized to a degree they may not be not capable of.

“Acutely high-risk” young people have been found to have three or more risk factors for committing violent crime: multiple arrests; a history of trauma, mental health issues, neglect, abuse or substance abuse; gang involvement; a parent who is or has been incarcerated; and significant difficulties in school, including Individualized Education Programs (IEPs) which reference cognitive impairment or emotional/behavioral disorders.

Andrea Durbin, CEO of the Illinois Collaboration on Youth, agreed. “How do we plan for the day when we’re not there? When the funding goes, and the support workers go, that child-family team is still there,” Durbin said.

The cascade of events that leads to incarceration can begin with “one bad decision,” Nash said.

Ben Austen, author of High Risers: Cabrini-Green and the Fate of American Public Housing, explained how public housing residents were first demonized when the system was in place, then abandoned when the high-rise developments were shut down. The fact that shelter has become astronomically expensive, taking larger and larger chunks of families’ income, is a serious problem for the wellbeing of our city because, in terms of public safety and mental health, “housing is foundation,” Austen said.

The symposium featured a performance by poet Kyla Strickler, a member of the team that took second place at this year’s Louder Than a Bomb youth poetry festival.

High school student Kyla Strickler treated the audience to a performance of original poems that helped her school’s team win second place at this year’s Louder Than a Bomb poetry festival in March.

In closing remarks, commissioner Julie Morita of the Chicago Department of Public Health reflected on youth violence from a public health point of view. “We can look at the conditions that encourage the conditions,” she said—but we must do so in service of the primary task at hand: successfully reaching the small number of young people who are creating, and experiencing, “a crisis in terms of violence.”