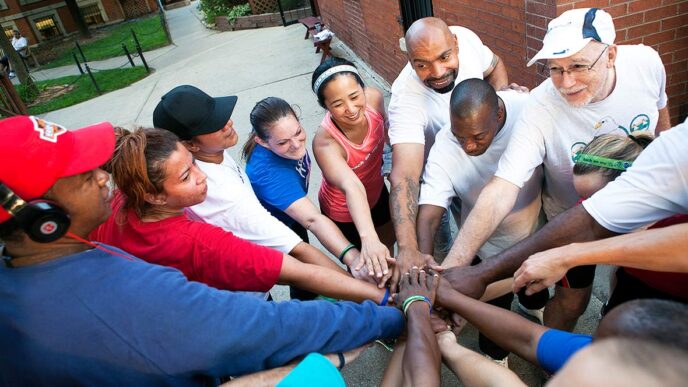 It’s just before dawn on a rainy morning on Chicago’s Near West Side where a group of men and women experiencing homelessness have gathered outside of St. Leonard’s Ministries to prepare for a run.

Getting up to run this early is new to many of the participants. They’re in a program called Back on My Feet, which helps those experiencing homelessness get back on their feet—in more ways than one.

In the drizzling darkness, volunteers Kathy Higa and Sherita Mallit do warmups and stretching exercises with the group, then join them in a circle to recite the serenity prayer before hitting the streets.

“Okay, let’s go!” the volunteers shout, and the group takes off running east along Madison Street, past the United Center, on routes that will take them anywhere from 2.3 to 5 miles.

Mallit, 27, a day care teacher, runs with the group at least once a week. She sees her role as a motivator and as a listener. “I push, and they push me,” she says. “Some people like to talk while running and others prefer only to run and talk later. I believe I motivate by just showing up.”

Before dawn, runners from Back on my Feet hit the Chicago streets. The program helps men and women experiencing homelessness challenge themselves to new accomplishments and build community.

Higa also tries to motivate and inspire runners. “I try to help the members see how running can help with so many areas of life. It’s all about the forward movement—literally and figuratively,” she says. “Running has helped me through so many difficult times in my life, and I hope it can have the same effect on them.”

Higa and Mallit are among about 50 volunteers in the Chicago area for Back on My Feet. Meredith Weber, senior development and marketing director for the Chicago chapter, says that volunteers play a key role in helping participants get on track. Not only that, many volunteers have found that the simple act of running alongside people experiencing homelessness has changed their perceptions about it.

“At first I was nervous because I wasn’t sure if I could relate to people who are homeless or just out of the penitentiary,” says Higa, 42, who began volunteering about a year ago. “I call this my second family now. I feel we have a real sense of community and family.”

The Back on My Feet program indeed fosters a sense of community by providing a structured program for individuals experiencing homelessness to help them reintegrate into society. The program was founded in Philadelphia in 2007 and now has chapters in 11 cities serving homeless people from all walks of life.

Volunteer Sherita Mallit chats with a fellow volunteer after a run. “When you can’t give a lot of money,” Mallit says, “you can always give your time and energy. The world needs more of that.”

The Chicago chapter started five years ago, and has four locations including the Near West Side, Garfield/Humboldt Park, Uptown and the Loop. The women who take part in Back on My Feet at St. Leonard’s come from nearby sister facility Grace House, an all-women’s residence.

As the early morning run continues in the rain, runners begin to separate at their own paces. Some newcomers, like Calvin B., released from prison just a month ago, start at a more modest pace. He’ll move from a brisk walk to a jog, he says, when he gets a new pair of running shoes, which all members receive. Calvin heard about the program from a fellow inmate before being released. “I feel great,” he says. “It’s all about building your self-esteem.”

Johnny W., released from prison seven months ago, is a strong runner now. He strides east on Madison at a good clip. He says that before he joined the program, he had no idea what it was like to run. On his first day he decided to run a just one mile, but started at a sprint. “I took off as fast as I could, but stopped after about a block,” he says with a laugh.

He says the program has surrounded him with positive people doing positive things, something he did not experience in prison. He never got much exercise while incarcerated, and now he usually runs a full five miles. “I didn’t know how good I could feel,” he says. “Ever since I began running, I’ve felt great. After I run, I feel good all day.”

Cathy Higa, one of about 50 volunteer runner/mentors, gives a high-five to a participant. This year she’ll be running the Chicago Marathon alongside fellow volunteer and first-time marathoner Sherita Mallit; together they’ve raised over $3,000 in donations for Back on My Feet.

But it’s not just the running. The program and its volunteers have helped move him forward in other ways. “It’s really made a difference. Back on My Feet gave me a chance. It taught me to trust again. They’ve taught me that there are good people in the world,” says Johnny, who got a part time job as a custodian. “They keep pushing me.”

Back on My Feet members inspired Mallit to sign up for her first marathon this year, and she is running along with Higa in the 2015 Bank of America Chicago Marathon on October 11. They’re part of the Back on My Feet fund raising team, and have raised more than $3,000 for the program.

Mallit says running with Back on My Feet is a great way to give back. “When you can’t give a lot of money, you can always give your time and energy,” she says. “The world needs more of that. If you want to feel connected to a cause greater than yourself but will impact society forever, volunteer with Back on My Feet.”