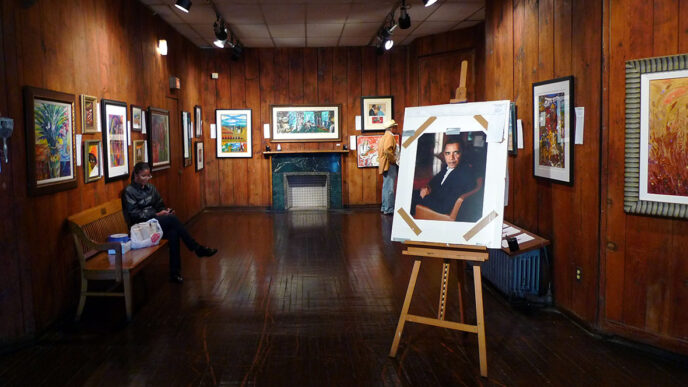 The Dr. Margaret Burroughs Gallery at the South Side Community Art Center. Image by Tony Smith

Vocalo Steps Inside an LGBTQ Safe Space, a Museum + a Maple Tree Ritual

Just a few years ago, there was a place in the Chicagoland area where dancing was not allowed. Today, students at Wheaton College can only dance at school-sanctioned events. And while the college, just 25 miles west of Chicago, attempts to balance student care with a strict community covenant, it still holds some rather controversial policies, including the prohibition of same-sex relationships.

Despite its rigidity, many Wheaton students have found safety and security, and a place to live their identities out in the open, thanks to one dedicated alumna and her wife.

Listen to Vocalo storyteller and Wheaton graduate Luke Vander Ploeg share their story in “Thursdays at Lora and Cathy’s”:

Founded by the late Dr. Margaret Burroughs, the DuSable Museum of African American History and the South Side Community Art Center (SSCAC), which Burroughs was also instrumental in cultivating, are two of the oldest Black cultural institutions in the United States.

In “Carry on Tradition,” storyteller Ayinde Jean-Baptiste sits down with Pemon Rami of the DuSable Museum and Maséqua Myers of SSCAC, partners and collaborators for 45 years. Together they explore the legacy and impact of these institutions on generations of Black artists and activists, including each other.

Also: Native American history and how contemporary Native Americans live are stories not often told. A program between Northwestern University and local American Indians stands to not only change that, but also rebuild relationships—through maple tree tapping.

There is a long tradition of maple tree tapping among Chicago’s Native American community. In uncovering that history, storyteller Angie Little meets an undergraduate and a former researcher who are part of the unique cross-cultural partnership between the American Indian Center of Chicago and the university.

The Chicago Community Trust is in partnership with the Vocalo Storytellers Workshop series. Over the next several months, workshop participants will share unique examples of what giving back and philanthropy mean in underrepresented communities and across different cultures.