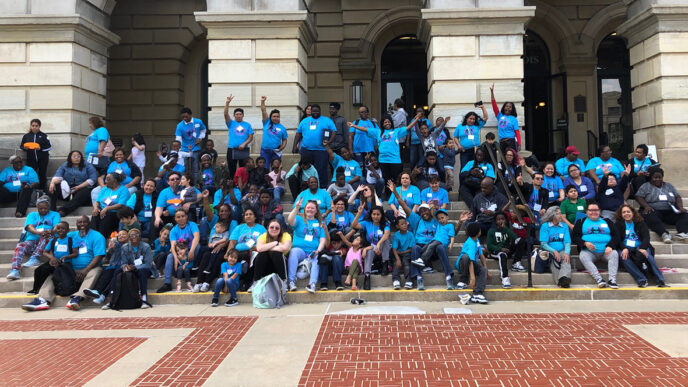 United in Closing the Wealth Gap

From payday loans that charge up to 400 percent interest rates to steep fines and fees on missed utility bill payments, many hurdles exist for Black and Latinx households to build wealth. Without even a modest cushion of savings, families often remain trapped in poverty. In line with the Trust’s expanding interest in policy and systems change, a new grant program—Coalitions for Equitable Wealth Policy—is supporting 11 coalitions working to address inequities in wealth creation that are holding back Black, Latinx, and other racial and ethnic populations.

“We’re proud to work with and support an exemplary group of coalitions that have, in many cases, been working together for years to achieve significant policy gains and push back against the growing racial wealth gap,” said Joanna Trotter, senior director of community impact for the Trust. “This funding approach recognizes and supports the strengths coalition members bring to the table, including leadership development, communications, research, organizing, legislative engagement, legal and policy expertise, and more.”

The Woodstock Institute is leading the Illinois Payday Lending Coalition, which has begun mining a state data source to show how predatory lending, including payday loans, are stripping wealth from communities of color at a higher rate than others. Coalition members include Illinois Asset Building Group, Illinois PIRG, Chicago Urban League, and Community Organizing and Family Issues (COFI). The coalition is also collecting stories from people affected by predatory lending, which combined with localized data will be used to educate lawmakers about the need to enact policies that provide “economic guardrails” for Black and Brown consumers, said Brent Adams, senior vice president of policy & communication, Woodstock Institute. These guardrails would include policies such as capping annual percentage rates that lenders can charge and requiring lenders to run an ability-to-repay analysis before making a loan that a customer will never afford to repay.

“The Trust’s support for coalition work is so important because it matches the way the work gets done with the way the work is supported,” said Adams. “A number of our coalition partners are small nonprofits with no shortage of demands, and they have to make tough choices about what they focus on. Having resources dedicated to their participation in this coalition allows us all to work together and make this issue a priority amongst many other competing priorities.”

The Trust is also funding Economic Security Illinois (ESIL) to run the Illinois Cost-of-Living Refund Coalition, a project of the Metropolitan Planning Council. These groups are working to expand the number of Illinoisans who receive an annual Earned Income Credit (EIC) on their state tax refund, as well as increase the amount, while also exploring other ways the state can put cash into the hands of people who need it most.

“When people are struggling financially, they need access to dollars, no strings attached. They don’t need another hoop to jump over or through—they just need money,” said Amber Wilson, statewide coalition manager for ESIL, who as a single mother once relied upon her annual EIC refund to stretch her budget and cover emergencies.

Currently, the state’s EIC provides a refund to Illinois residents ages 25 to 64 earning between $12,000 and $55,000, with additional money going back to households with children. The coalition is working to expand the credit to include caregivers, residents ages 18 to 24 and 65-plus, students who qualify for MAP grants, and working immigrants and taxpayers who file taxes with a government-issued Individual Taxpayer Identification Number.

Although Martin Luther King, Jr., advocated for cash transfers decades ago, the pandemic has ignited interest in this proven approach to reduce poverty. Research shows that when low-income people receive cash, they use it to take care of their needs—ultimately leading to better educational, health, and employment outcomes—and sometimes can even establish savings.

“There’s so much uncertainty in this moment we’re living in, but one thing we know for certain is that things can’t continue the way they’ve been. That puts us in a motivational place,” said Wilson. “Whenever we get past COVID, we need to be in a place where people have a cushion.”

Ellen Schumer, executive director of Community Organizing for Family Issues (COFI), agrees that both the pandemic and Black Lives Matter movement have led to “dramatic pivots” in public understanding of poverty, shedding light on the long history of misguided public policies and structural racism that has led to the growing wealth gap. The Trust is supporting COFI—which has trained more than 5,000 low-income parents of color to become civic leaders—to work with parent-led POWER-PAC IL to change policies to increase wages and savings and reduce debt for low-income people.

COFI parent leader Rosazlia Grillier co-chairs the Stepping Out of Poverty campaign, which is taking lessons learned in Chicago to a national table. Their work builds on the effort COFI parents led to establish the Fines, Fees, and Access Collaborative at the Chicago City Clerk’s Office. The collaborative is working with the City to change how fines and fees such as parking tickets and late water bill payments are assessed and collected.

“As parents, we are able to show the City—and now our national cohort partners—why we need to stop building our revenue on the backs of people who have nothing,” said Grillier, who lives in Englewood and raised two daughters, a stepdaughter, and “a truckload of nieces and nephews.” “I’m proud to say this work is now going across the country, as we work with other cities and counties to share what we learned and pull pieces from them, too.”

Grillier crystallized why coalition advocacy is the right approach for achieving equitable wealth policy: “It took years and years of policy development to get to this very place, and no one thing can be the solution,” she said. “Our goal is that we can say to the next generation of parents raising children, ‘We didn’t mess up everything, so you have some hope to build on, to do your best, so that the next generation can do better.’”

Learn more about the Coalitions for Equitable Wealth Policy effort.