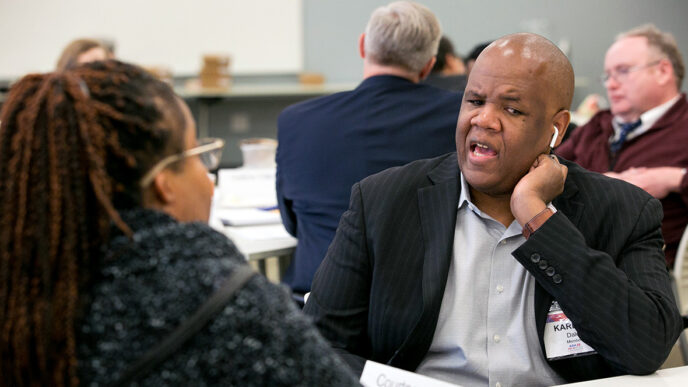 Kareem Dale has built an impressive record of leadership in the private and public sectors. A director and senior counsel at Discover Financial Services, he previously served as special assistant for disability policy in the White House for President Obama and as board president of Black Ensemble Theatre.

As of this January, Dale can add another accolade to his list of accomplishments: being appointed by Governor J.B. Pritzker to serve on the University of Illinois Board of Trustees.

A three-time graduate of the University of Illinois himself (he earned his bachelor’s, law and master’s of business administration degrees there), Dale looks forward to serving his alma mater with his unique blend of expertise in law, financial services and diversity and inclusion.

[pullquote]“Decisions shouldn’t be made about us without us having a voice”: 3-time @Illinois_Alma ‏grad Kareem Dale appointed to school’s Board of Trustees w/support from @ADA25AdvLeaders, working to advance leaders w/#disabilities[/pullquote]

“University of Illinois is a top-rated school, and it’s also known for being one of the best universities in the country when it comes to disability inclusion services for students,” says Dale. “I look forward to bringing my experience to support the university’s goals.”

As a leader with a disability, Dale understands the importance of having more people with disabilities serving in leadership roles.

“For people with disabilities to truly be represented in leadership, the best viewpoint is that of a person who has a disability, not just an advocate or relative or someone who cares. Decisions shouldn’t be made about us without us having a voice,” Dale says.

Dale was supported in his effort to join the University of Illinois Board of Trustees by ADA 25 Advancing Leadership’s Public Service Leadership Project. The project works to address the underrepresentation of people with disabilities in publicly appointed positions by connecting leaders with opportunities to serve.

Kareem Dale served as special assistant for disability policy in the White House and board president of Black Ensemble Theatre before becoming director and senior counsel at Discover Financial Services. Dale, who holds three degrees from the University of Illinois, was recently appointed by Governor Pritzker to serve on the the school’s Board of Trustees.

Dale recalls that the Advancing Leadership team reached out to him last November to ask if there were any State of Illinois public service opportunities he would be interested in. At their suggestion, Dale completed the online application for the Board of Trustees and was invited for an interview. At the same time, Advancing Leadership reached out to the governor-elect’s transition team to give them a heads-up about Dale’s application and to encourage them to consider including persons with disabilities in public appointments.

“When I went in for the interview, the transition team said they were happy that Advancing Leadership reached out and they were also happy to consider candidates with disabilities,” Dale says.

Dale says that intentional outreach such as that provided by Advancing Leadership can help ensure decision-makers are thinking about a disability perspective and aware of high-caliber candidates who can make a meaningful contribution.

“For people with disabilities to truly be represented in leadership, the best viewpoint is that of a person who has a disability, not just an advocate or relative or someone who cares. Decisions shouldn’t be made about us without us having a voice.”

“People with disabilities, like anyone else, can be excellent candidates for public service. Often times, they just need to be brought to the attention of people in power. Advancing Leadership plays an important role by making the connection, putting forward high-quality candidates and making sure they have a fair shot,” Dale says.

Dale brings a wealth of experience and knowledge with him to the University of Illinois Board of Trustees. Of all that he has accomplished, he is most proud of having founded his own law firm, the Dale Law Group, in 2007, and having served the first African-American president of the United States. But in his new board role, he intends to start at the beginning, at least for now.

“I plan to learn as much as I can during my initial time as a trustee so that I can eventually contribute my expertise to help the university grow, be in the right space and build on what is already a great school,” Dale says.

ADA 25 Advancing Leadership Executive Director Emily Harris comments, “Our mission is to create a pipeline of leaders with disabilities serving at tables of power and influence. We congratulate Kareem—an extremely qualified leader who will bring a key voice to this important board—and we commend the Pritzker administration for making a critical first appointment.”

If you are interested in learning more about Advancing Leadership’s Public Service Leadership Project, please contact Risa Rifkind at rrifkind@cct.org.