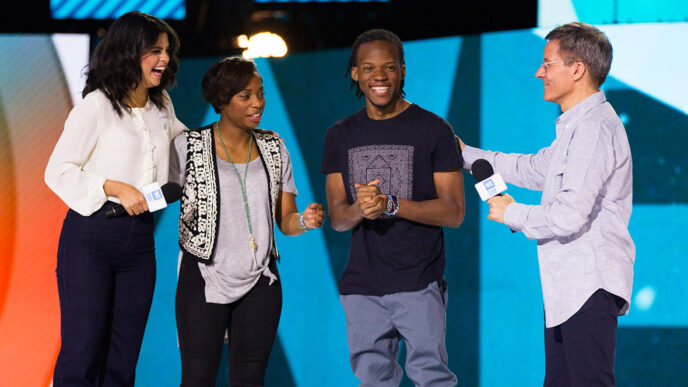 At We Day Illinois

A few years ago, Chicago native Razia Hutchins found herself in a classroom discussing the shooting death of a local teen after a high school basketball game. Unfortunately, stories like this were all too common and most people just accepted it as simply the way things were—but not Razia.

Razia, a Perspectives Charter School student, wanted change to come to her community. Refusing to sit on the sidelines while young people all around her were succumbing to gun violence, she saw her opportunity to act and not be “a victim, [but] be a voice.”

[pullquote]Watch how two teens turned a local peace march into a global movement. @WeDay, 8/21 at 7:00 p.m. on @ABCNetwork[/pullquote]

According to Razia, “If you see something that’s not going right in your community, just stand up. Always speak up and don’t let one person or a group of people try to take you off track.”

Bolstered by her commitment to her community, she came up with the idea for a neighborhood peace march, and the I Am For Peace movement was born.

Teaming up with her best friend Maurice Young, the two rallied people across Chicago. The march has since grown from 100 people in its first year to 2,500 this year.

Being part of this effort was important to Maurice, who shares Razia’s can-do spirit. “It’s a way to be the change that you want to see happening in the world.”

A documentary, “I Am For Peace,” shares their inspiring story of how the students took to the streets to organize one of the largest student-led peace marches in the city’s modern history and create a lasting movement for peace. So far, the movement has been celebrated in 26 schools, 10 cities and three countries.

For their incredible community work, Razia Hutchins and Maurice Young had the opportunity to share their story on the We Day stage this past April. Allstate recognized the teens during the We Day event and presented them with a $10,000 scholarship for their efforts.

Check out their story and other inspiring young people during the broadcast of We Day on August 21, 7:00 p.m. on ABC.