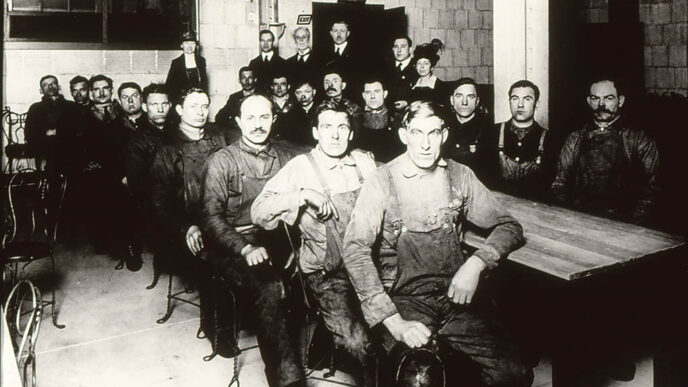 In the 1920s, “Americanization” was the catch-all phrase used to describe efforts to assimilate immigrants into the American way of life, narrowly defined by the standards of the time as white Protestant mainstream culture.

Americanization in Chicago was the first of several social surveys from the Trust, created in response to the recent turmoil of World War I and the changing mosaic of Chicago’s population. Americanization was authored by consultant Frank Loomis, who later became the Trust’s second executive director. Loomis borrowed the idea of the social survey from the Cleveland Foundation, which had already conducted a survey on criminal justice.

In his report published in 1919, Loomis posed several questions:

The report was in part a response to the cultural hysteria that seemed to be engulfing Chicago. This so-called hysteria was itself a response to “the elements of discord and disintegration” (as described by Loomis) stemming from World War I, race riots in the summer of 1919, labor unrest mounting since the 1886 Haymarket Riot and the Pullman Strike in 1894, and a new wave of anarchism and socialist movements emboldened by the apparent success of the Russian Revolution.

Although Chicago had experienced a serious race riot in July and August and the massive migration of African-Americans from the South continued, the report only noted that race relations were an ongoing problem to be solved, and it did not discuss Chicago’s large and growing African-American population further.

By today’s standards the report was inadequate, and by historical standards it did little to enhance or broaden the Trust’s reputation. But it did establish a trend of Trust-commissioned social surveys that grew in importance over the decades that followed.

The second social survey, Housing of Non-Family Women in Chicago, lacked definition and purpose, but the third social survey published in 1923, Prenatal Care in Chicago, was considerably more successful in advancing the Trust’s profile with national recognition. While acknowledging its limitations, Loomis evaluated the significance of Prenatal Care in his 1923 Annual Report: “If [the Trust] can aid the community by discovering the real facts of a situation… it will present them to those who ought to know them as fully and fairly as possible; and when it has done this, it can go as far it can go.”

Americanization and the early surveys began a pattern that has continued intermittently throughout the last century, establishing the full range of the Trust’s interest and developing expertise in community matters.