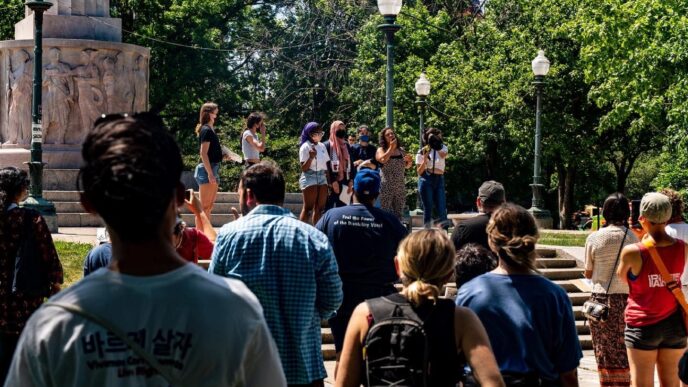 Photo Credit: Alliance of the Southeast

As a part of its 10-year strategy to close the Chicago region’s racial and ethnic wealth gap, the Trust made a deliberate commitment to investing in community organizing. Organizers, who are deeply rooted in their communities, know best what their neighbors need. And, when opportunities arise, they have the trust and networks necessary to drive change.

The Changemakers Network, launched in April 2020, provided grants to 18 community organizations and grassroots leaders. It also established a community of practice, where the participants work together across neighborhoods to develop strategies that accelerate community-driven change.

In this Q&A, Building Collective Power teammates Maritza Bandera, Lauren Woods, and Alexandra Ivory, discuss how community organizers responded to resident needs during the COVID pandemic and how the lessons learned demonstrate organizers are essential partners in shaping policy change.

Q: When we talk about community organizing, what does that mean and why do you think it’s important?

Lauren Woods, Program Manager: Organizing isn’t a new concept—it is building on the wisdom of 1,000 years. As people, we have always looked out for each other and found ways to create community. What I find particularly unique about the Changemakers Network within Building Collective Power is that we are highlighting those important community players that have sustained us. Being an organizer doesn’t require special credentials—most organizers came into their role because they were responding to a specific need. This work requires passion and is anchored in the feeling of responsibility for your community and ownership around where you live.

Q: Talk a little bit about the role community organizers played in response to resident needs during COVID. How did the lessons learned demonstrate that organizers are essential partners in our recovery and shaping policy change?

Maritza: One of the things that we did see was a big pivot. Organizers are primarily known as connectors and don’t necessarily provide direct social services.

During the pandemic, the need was dire in many of our already disinvested neighborhoods and communities in the city and in the region. For the organizers, it was “how do we ensure that people have the basic needs and necessities met? How do we help inform people because there was a lot of untruth circulating in many of our communities related to the virus?” But it was not only helping to inform people. It was also about being a support network. We saw organizers and residents build mutual aid networks, and honestly before any stimulus relief efforts, this is how our communities were able to sustain themselves. And even once the federal government stepped in, mutual aid networks were still necessary given that undocumented individuals and families were left out.

Lauren: One of the learnings, particularly during the pandemic, is that we have a community of people who have the agility to be thoughtfully responsive in a way that is distinct from a lot of institutions, nonprofits or even foundations. Our systems are not as quick as our organizers. I think we are learning how to trust the experiences and the truths of communities and not to spend too much time researching issues that neighbors have clearly and collectively expressed as areas of concern. We are learning how to show up as better partners which means that we listen, leverage our resources, and allow residents the space to lead in the ways that they know how.

Alex: One thing that I would say about philanthropy is that they have the power to break down barriers as needed to address issues. It’s important that philanthropy recognizes the power and privilege they have and figure out how they can actually shift that power to those community members.

Q: What are some ways you’re doing this?

Maritza: We think of the Building Collective Power strategy as the people strategy. Our work centers people and the most impacted. For instance, when we developed the Changemakers Network RFP, we thought we should talk to community organizers, and we did. What they had to say was very important and that helped inform what we would fund.

Another example is reporting. If we have interim reports, I just set up check-ins with them. First, I check in with them at a human level. Then it’s “okay, now tell me about your organization. What’s new? What’s working? What’s not working?” The what’s not working is the part I care the most about, not from a punitive standpoint, but what is it I can learn.

As a team, we make every effort to build trust with our grant partners and this comes over time. At the same time, as we build trust and mutual accountability, we dismantle the power dynamics between funder and grant recipient. It’s more of a partnership rather than a transaction.

Lauren: Philanthropy’s role in supporting community agendas, storytelling and narrative change is to understand that it is not solely about the outcome—the strategies and methods residents employ to build collective power, to build trust, to organize, to share their stories is of equal importance. It is important to understand that this work is a commitment to a continuous practice of being a good neighbor.

In my grant-making role, I greet my conversations as a fourth generation Chicagoan first. I owe it to my citywide community and the village that raised me to show up in this way. I think of other Chicagoans who have thoughtfully spent time exploring ways to make our city better and am reminded there is still much work to be done. This framing strengthens my approach and allows me to imagine how we might elevate the spirit and intention of promising ideas.

Alex: I think it’s essential that we continue to ask ourselves, how do you make yourself available? And then, how do you meet grant recipients where they are? How do you break down some of those barriers to access? We should continue to challenge the mindset of “thinking I know what’s best for you,” when in fact, these grant recipients actually know what’s best for them because they’re the ones who are on the front lines acting on these different issues.

Q: Is there anything else you want people to know?

Lauren: I want people to know that we are engaged in this work. I want them to join us. I want Chicagoans and residents of this region to think about what it means to build collective power. I want us to think about what it means to amplify narrative and to organize. I want us to speak and listen to one another and take action that is informed. I want us to be curious, intentional, and reflective. The goal of this work is to build momentum and to have as many people participate as possible.