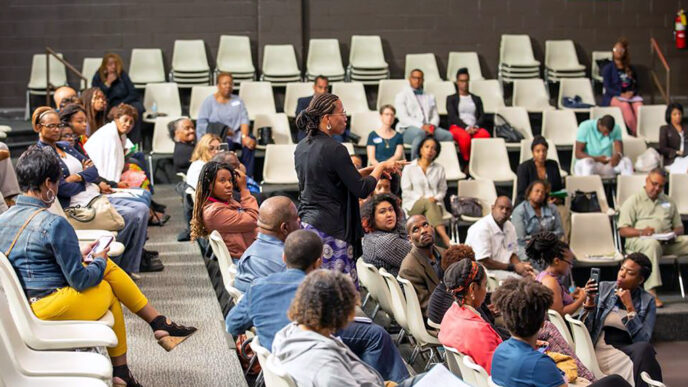 Together We Are Stronger: Chicago’s Legacy of Black Philanthropy

Since 1926, February has been designated as the week—and later in 1976, as the month—to honor legendary African Americans that have inscribed their mark in U.S. history; individuals that have against the odds emerged as leaders and pioneers of change.

Infused with this same dedication to change, in 2003 The Chicago Community Trust convened a group of African American community and civic leaders to lead a philanthropic initiative to improve the quality of life for African Americans in Chicago.

Among this group was Frank Clark, retired chairman and chief executive officer of ComEd who now serves as president of the Chicago Board of Education. His words of encouragement still echo as a reminder of the passion and perseverance needed to ignite and advance this mission.

Frank Clark, the former chairman of the Trust’s Executive Committee, was a prominent voice in leading the formation of the African American Legacy. “We are in a fight for our future,” Clark said at the time. “We can go forward by demanding more of our community and ourselves, or we can go backward by ignoring the problems and leaving them for someone else to solve.”

“The African American Legacy initiative represents a unique opportunity for us to invest in the future of our community. We are in a fight for our future,” Clark said at the time.

“We can go forward by demanding more of our community and ourselves, or we can go backward by ignoring the problems and leaving them for someone else to solve,” Clark added. “Join me in moving in the right direction.”

In addition, AAL has civically engaged through honoring leaders in the community and providing a platform for youth advocates to have a voice; and inspired philanthropy through every board member, friend and donor who reinforces the existence of AAL and passes this message along.

The African American Legacy’s approach to strengthening the African American community in Chicago includes grant making, philanthropy and civic engagement, including On the Table conversations that provide a platform for building new connections and new solutions.

In the heart of it, if there were four words to describe the purpose and vision of AAL it would the conclusion to every thank-you letter to a donor; it would be the #hashtag to every event; it would be the synthesis of philanthropy: Together We Are Stronger. AAL represents the belief that the strongest catalyst for change begins with supporting and amplifying the cornerstone of Chicago—the community.

So as the month continues, and the achievements of African Americans are celebrated across the nation, we ask that you take a moment to reflect and also support organizations and initiatives like AAL that are building a legacy of opportunity for generations of African Americans.