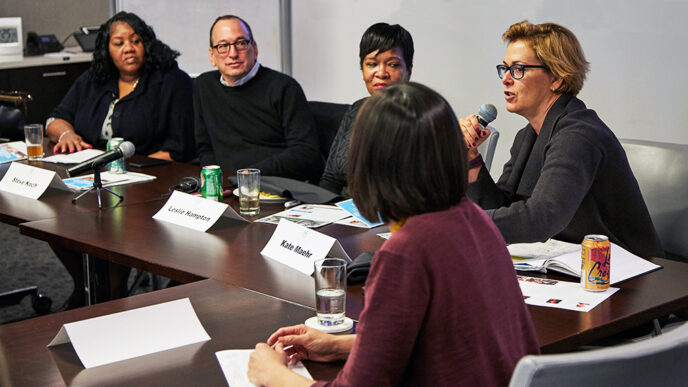 One out of seven residents faces food insecurity in the Chicago region.

On October 24, The Chicago Community Trust convened a select group of donors who are investing in the fight against hunger and food insecurity across the Chicago region.

They gathered around the table for a conversation with community leaders including site director Thelma Jackson Thompson and health & nutrition operations director Leslie Hampton, both of the North Lawndale YMCA; Kate Maehr, executive director and CEO of the Greater Chicago Food Depository; and Anna Lee, the Trust’s program officer for basic human needs.

“A lot of our programs are in food deserts, but the irony is that 33% of our children under the age of five are either obese or overweight. Parents are doing the very best they can, but the cheapest food is the stuff that’s not good for us. I just enrolled a child that has Type 2 Diabetes and she’s four.”

Together, the group explored the barriers to food access in our region, and how those vary across unique populations: from children, to older adults, to people with disabilities, to working families. They also took a look at innovative, results-oriented solutions with the potential to reduce food insecurity.

Some of the interlocking pieces of the food security picture:

Who they serve. The Greater Chicago Food Depository serves more than 800,000 people annually. Beyond preconceived notions of who goes hungry, this enormous population includes everyone from students to working families.

“The people we serve are going to work, to school, paying their bills, put gas in the car so they can get to work next week—but there’s no food in the kitchen and there’s no money in the bank account,” said Maehr. “Families are turning to food pantries as a coping strategy.”

Why they can’t do it all. For every meal that a food pantry or food bank provides in this country, the federal Supplemental Nutrition Assistance Program (SNAP) provides 12.

As government services like SNAP have their budgets slashed, it is often suggested that private donations will take up the slack. But the math simply doesn’t add up—philanthropic dollars will never be enough to make up the shortfall, leaving vulnerable families squeezed out of the support they need to regain stability.

“We have eight food banks in the state of Illinois, but I’m going to tell you, they are stretched incredibly thin,” Maehr said. “Particularly food banks serving rural communities, food banks in parts of the country that have been really hit by job loss: if the SNAP program is constricted, we are going to see a world of hurt and, in particular, families with children are going to see more hurt.”

How they’re thinking differently. Even as the recession has abated, lines have not gotten shorter at food pantries. This demand “has made us realize that we have to think about this work and how we respond to the need very differently,” says Maehr.

She described four strategies that the GCFD is embracing to move the needle on hunger and food insecurity at a systemic level:

“We have eight food banks in the state of Illinois, but I’m going to tell you, they are stretched incredibly thin. Particularly food banks serving rural communities: if the SNAP program is constricted, we are going to see a world of hurt and, in particular, families with children are going to see more hurt.”

Many neighborhoods in Chicago have been described as “food deserts,” signaling a scarcity of fresh and healthy foods available to residents.

At the North Lawndale YMCA, staff has partnered with the GCFD to create a Healthy Market twice a month. Parents picking up their children from the Head Start program can shop for their choice of fresh fruits and vegetables at no cost before heading home.

“They don’t have to go anywhere else,” Thelma Jackson Thompson explained. “If you’re picking up five babies of various ages, you’re not going to the grocery store that day. However, if it’s the first or third Friday then you can just come upstairs and leave with cereal, leave with fresh fruits and vegetables, and the parents are really, really loving it.”

Not only have parents requested that the market be offered weekly, but there is also demand among he children, who enjoy learning about fruits and vegetables that they’ve never been exposed to before.

For Leslie Hampton, crucial to understanding the market’s success is not only its location, but also its affordability. “Our parents are struggling financially and in a lot of cases they are trying to make sure that they pay rent, keep the lights on, feed their children and keep their children healthy,” Hampton explained. “The barrier to accessing healthy nutritious food is usually around income, rather than geography. It’s not that I don’t have something across the street—it’s that I live in a household where the income is $8,000 a year and I don’t have enough money to go and spend.”

“I’m a big proponent of the SNAP program. It works because it’s really efficient; there’s not a lot of bureaucracy. People get money that they can use to buy food, they buy that food in grocery stores; those grocery stores get that food from producers; that money ultimately flows back to communities and farmers in a really direct way,” Hampton said.

“It gives people choice to buy the food that they themselves want. So, there’s a component of dignity. That, to me, is a more efficient and effective response than building infrastructure. There may be other reasons to build infrastructure, but I don’t think response to hunger is necessarily the reason to build a store.”

“Chicago has, in addition to food security issues, a serious public health crisis,” said Steve Koch, the former deputy mayor of the City of Chicago, who serves on the Trust’s Executive Committee. “This isn’t just a problem, it’s a major epidemic crisis of food-related diseases such as diabetes, heart disease, things that tend to relate to diet.”

Hampton added, “A lot of our programs are in food deserts, but the irony is that 33% of our children under the age of five are either obese or overweight. Parents are doing the very best they can, but the cheapest food is the stuff that’s not good for us. It is becoming a big health crisis, especially for some children that are so young.”

“I just enrolled a child that has Type 2 Diabetes and she’s four,” Hampton said.

This complex intersection of food insecurity, health and poverty means that solutions require a multi-faceted approach—like the GCFD’s longstanding program in workforce development, linking people who face barriers to employment with career pathways in the food industry. “It’s critical to think about connectedness [of human service sectors] as the leading edge of how you can get at this public health crisis that we face,” Koch said.

In a state like Illinois, where agriculture is big business, how does food insecurity persist?

At the GCFD, Maehr explained, “we have struggled, frankly, in thinking about how we connect to a local food system because we’re an organization that has to think at scale, so we always measure things in truckloads—and there’s not a lot of agriculture in the city of Chicago.”

“The barrier to accessing healthy nutritious food is usually around income, rather than geography. It’s not that I don’t have something across the street—it’s that I live in a household where the income is $8,000 a year and I don’t have enough money to go and spend.”

“That said, there’s a lot more that we can do to have conversations proactively with growers in our community,” Maehr said. She shared with the group that the GCFD is working to build its commitment to acquiring food locally—“which is good for growers, it’s good for our economy, it’s good for our environment.”

“But that requires us having a different conversation with donors. We have to be honest about the fact that we purchase food. For a lot of years, donors were shocked to hear that. They thought that we were just an organization that moved donated food. So we have to talk about the economic impact differently, and we have to come to different tables and be a part of conversations which have, for a long time, been separate conversations.”

Donor Dialogues explore pressing issues in our region and our world, forming learning communities by connecting practitioners and experts with donors who have the passion and leadership to make systemic change. Please contact your relationship manager for more information about upcoming Donor Dialogues. Or, if you are interested in becoming a donor with The Chicago Community Trust, contact Tim Bresnahan for information about the giving solutions we offer.