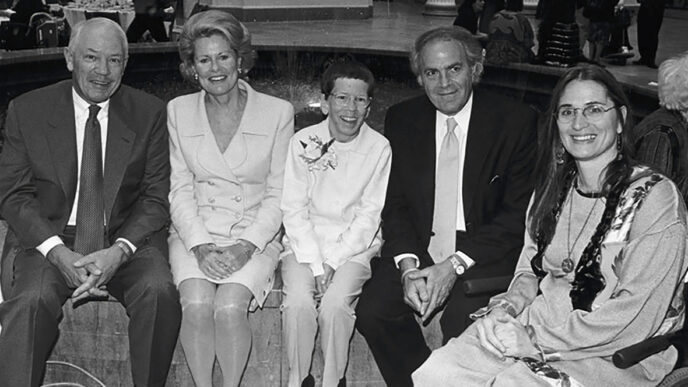 Shirley Ryan’s boundless energy has improved the lives of countless people throughout metropolitan Chicago. As a member of the Trust’s Executive Committee from 1988 to 1998, Ryan’s passions both inside and outside the Trust have made a major impact on any number of important areas.

[pullquote]Philanthropist Shirley Ryan: “You measure your life by how many people you’ve helped.”[/pullquote]

In particular, Ryan’s efforts have made great strides in assisting persons with disabilities. Ryan cofounded the Pathways outpatient pediatric clinic in 1985. Because each year hundreds of thousands of children are at risk of developing motor delay, Pathways empowers young parents to raise healthy children. Simultaneously, the program provides content to the American Academy of Pediatrics for its continuing medical education programs.

As Executive Committee chair from 1997-1998, Shirley Ryan accepts a charitable contribution to the Trust from Mayor Richard M. Daley and Maggie Daley

The span of Ryan’s interests is manifested on the institutions she has supported throughout her career: Lyric Opera, the Art Institute of Chicago, Northwestern University (her alma mater), WTTW, the Chicago Council on Global Affairs and many others.