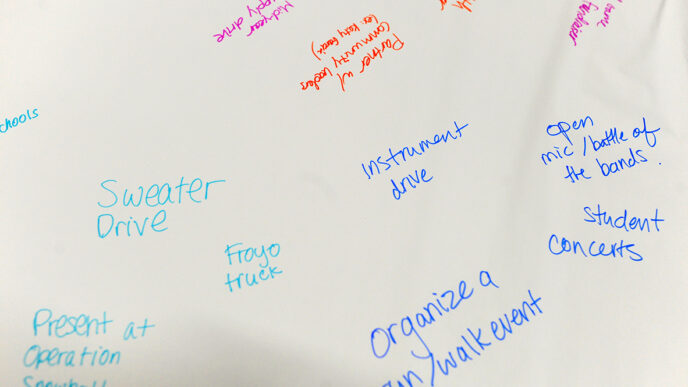 Through Depression, a High School Student Finds Her Voice

Elizabeth Einig will say she is “terrified” of putting herself in the spotlight. But this Schaumburg teenager regularly faces down her fears, if she thinks she can help someone.

Einig, 16, a junior at James B. Conant High School in Hoffman Estates, has spoken publicly of her struggles with depression to help raise funds for a Libertyville counseling center. She has also spearheaded the establishment of a mental health awareness day at Conant that is on its way to becoming an annual event.

Einig comes from a service-oriented family. “I can’t remember a time when I didn’t do service,” she says. She has been a stalwart at bake sales and car washes for years, she says, and she continued her activities with the Girl Scouts into high school largely because she wanted to try for the organization’s prestigious Gold Award, given upon the successful completion of a challenging service project.

The depression Einig experienced in seventh and eighth grades made a big impression on her. Although she met with a therapist and eventually “pulled out of it,” she says, those two years were a dark time in her life. “I think a big thing is, you can’t shut yourself out from the world. You should talk with therapists whenever you need to.”

This lesson loomed so large in her life that she wanted to share it. “I don’t want anyone else to feel like that,” Einig says. “When I got enough courage, I decided to work for mental health awareness.”

She resolved to make this work the focus of her Girl Scout Gold Project. Only when she began to work on the project did Einig realize how great the need is.

“One in four people suffers from mental illness. That was a lot higher than I expected. A lot of those people don’t get help.”

In October 2014, working with Conant High’s student council, an anti-bullying club, the school psychologist, and a number of teachers, staff and students, Einig organized the first annual Mental Health Awareness Day at her school.

The group set up tables in the hallways with literature about mental health conditions and resources, and put out containers full of “things that make you happy, or will ground you, based on the five senses”—tea light candles, chocolates, little journals—and let people put together their own “self-care kits.” Nearby, a large poster invited students to write a positive message on a Post-it note and display it on the poster for everyone to see. The poster was such a hit that it won a place on a wall outside the counselors’ offices.

A few weeks later, Einig was the keynote speaker at the annual gala of Youth and Family Counseling of Libertyville: sharing a video she had made about the importance of mental health services for young people, and speaking briefly in person before a crowd of about 300 people. The gala raised $140,000, up more than $40,000 from the previous year, according to YFC executive director Janelle Moravek.

Einig says, “The room was full of important adults, and getting up to speak was hard. I don’t actually even remember it. It terrified me. I think I got the courage to do it from thinking, ‘This isn’t about me. It’s for other people.’”

Einig hopes to become a neuroscientist researching mental health one day. “I would really like to work on getting rid of the stigma around mental disorders.”

“A lot of people are afraid to talk with someone about their problems,” Einig says. “There are a lot of resources out there, but people have to know about them.”