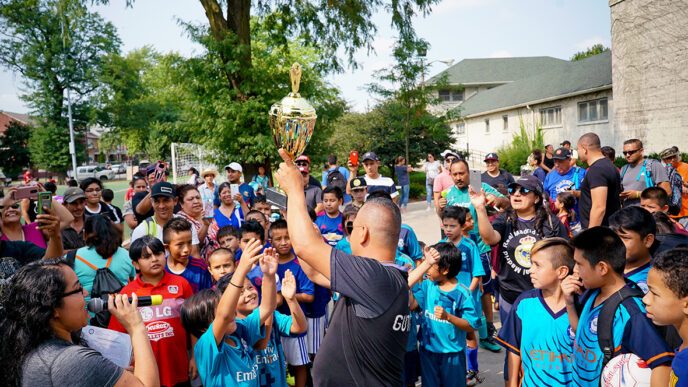 The soccer field at Cornell Square Park is filled with parents. Little kids trail paleta vendors and peer over tables loaded with pizza and cupcakes. Volunteers in bright yellow t-shirts shoo spectators sitting too close to the field.

On the field, the ref blows the whistle announcing the start of the next game, and two dozen kids in soccer jerseys—half white-on-red, half red-on-blue—swarm the ball.

[pullquote]“To live in fear is the biggest challenge there is. I hope that we can build a space to talk about our fear, and to humanize it”: @UnionImpactChi youth soccer program builds not just health + sportsmanship, but trust + community for #Chicago immigrant families[/pullquote]

This mild Saturday afternoon in August, the crowd is assembled for the final tournament of the U.N.I.O.N. Impact Center’s Summer Youth Soccer program. As the red team scores, four boys in blue on the sidelines throw their arms up in anguish, howling in dramatic despair.

U.N.I.O.N. Impact’s soccer program started 11 years ago with just one team in a league in Marquette Park. Seeing a growing need for both sports programming and subsidizing costs for kids who couldn’t afford to pay for gear and participation fees, the organization formed its own league. The league now boasts 19 coed teams, for boys and girls up to age 13. They come from 29 schools across the southwest side, but most are from Back of the Yards and Gage Park.

The Trust’s Unity Fund initiative has supported the soccer program for the last two years, most recently with a grant in 2018 of $20,000 for health education and physical activity programs for youth and parents in Back of the Yards.

“We wouldn’t be able to function the way we are functioning now without this support,” says founder and former executive director Rafael Yañez. When the program started, volunteer turnover was high and it was hard to sustain programming. With the support of the Trust, they are now able to offer stipends not just to coaches and other adult volunteers, but also older kids who want to learn to referee and coach.

“The funding from the Trust, it gives people oxygen,” he says.

Soccer program director Alfonso Garcia was recruited by Yañez 11 years ago. He says playing in the U.N.I.O.N. Impact league has multiple benefits for young athletes. They learn about healthy habits, for one, and they learn sportsmanship—if a kid swears on the field, they’re taken out of the game. Garcia says it keeps them out of trouble.

“We try to keep the good kids from going where there are problems,” Garcia says. “We keep them safe; we keep them busy. Sometimes it’s not easy, but we try to work with them. And I think it helps.”

The soccer program runs year-round; winter games are held at Cesar Chavez Elementary, whose students make up 50 percent of the kids in the program. “U.N.I.O.N. Impact builds really strong relationships with their kids as coaches and mentors,” says Chavez assistant principal Joe Rosen. “And they hold them to really high academic standards. The kids know that if they miss school one day they can’t play soccer that week.”

Rosen explains that the games don’t just benefit the players: Chavez students who might otherwise just be at home, or in the streets, come to watch. Recently, they’ve also started a fund for parents, building dialogue around healthy behaviors and nutrition, and offering a Zumba class for the adults concurrent with soccer practices.

“To live in fear is the biggest challenge there is. I hope that we can build a space to have an opportunity to talk about our fear, and to humanize it.”

Interim executive director America Campos took over from Yañez in the summer of 2018. Previously, she’d been a Peace Corps volunteer in Peru and, she points out, “A lot of the work I did there, I found that we also need here.” She hopes to continue to focus on community building, developing more collaborative relationships with community groups and parents.

But, Campos reiterates, the kids are the foundation. “You get to know these kids and eventually they open up and share things with you, and it’s a lot, in terms of the current political climate. If they’re not affected by immigration issues, they know someone who is. It’s everywhere. It really humbles you.”

After the 2017 inauguration of President Trump, Yañez notes, some families were scared to send their kids to school, out of fear they would be deported. But they were still coming to soccer practice in the same buildings, so the schools and the coaches reached out in tandem to worried families.

“We have been able to build trust and build community, and also support their academics,” says Yañez. “if they’re not coming to school, they’re not learning. We want to make sure it’s a wraparound program.”

“To live in fear,” says Campos, “is the biggest challenge there is. I hope that we can build a space to have an opportunity to talk about our fear, and to humanize it.”

Back on the field, the last game is a face-off between Team Barcelona and Team Real Madrid. As the kids finish up goofing around, the competition heats up. While many of the older players have serious skills, there are players on the younger side—one of the Barcelona players just turned four, and his jersey hangs to his knees. But what the teams may lack in polish, they make up for in energy.

When it’s over—Real Madrid wins!—it is time for the awards ceremony. Campos gathers the teams, parents and volunteers by the field house and runs through a litany of thank-you’s; then trophies, medals and t-shirts are handed out to all. “Gracias a todos!” she says. “Felicidades! Gracias por su apoyo!” In the background, the DJ hits play on “We Are the Champions,” and turns up the volume.

Through the generosity of donors, Unity has addressed some of the most challenging issues facing our region—hunger, homelessness and community health—and empowered organizations that make our communities strong. Become a part of Unity Fund today. For more information on Unity Fund or to make a donation, please contact Adriana Viteri, manager of development and donor services at aviteri@cct.org or (312)616.8000 ext. 149. Or you can make a donation online.