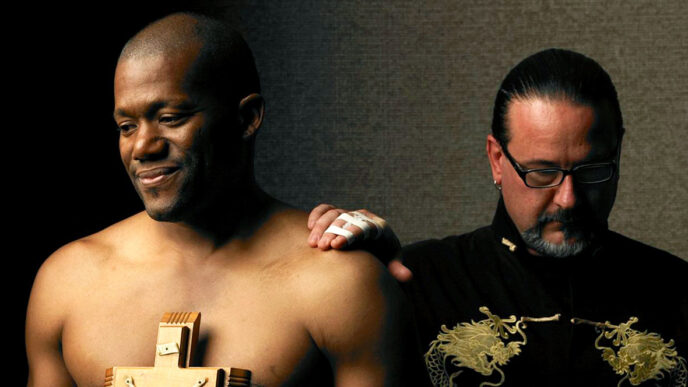 Many people have marks on their bodies that remind them of something they’ve struggled to escape and want to leave behind.

Eric Dean Spruth, MA, ATR, understands what it feels like to be marked. He was labeled with a variety of learning disabilities as a child, and cast off to a place in the educational system that would not allow him to flourish.

Yet through his own determination and the help of others, Spruth was able to transform his life to go on to college, earn a master’s degree and become an art therapist.

Spruth never forgot his struggles, and has dedicated himself to giving back to help others make their own kinds of transformations through his Chicago-based nonprofit Sacred Transformations. Spruth volunteers his time, and spends much of his own money, to help people turn tattoos, scars or burns into positive expressions of who they are.

Using his artistic skills, Spruth creates tattoo art to transform, beautify and blend in with marks on peoples bodies that came from negative experiences—women who were victims of human trafficking, scarred veterans, those who had self-injurious behavior and ex-offenders working to re-enter society.

“It’s not so much about the tattoo or the scars they have, but about how they see themselves and how they want others to see them in the world,” Spruth says. “We help them through that.”

Samantha Meyer, 30, wanted to change the way the world sees her. She is marked with scars from cutting herself when she was younger. “I’m always worried what people will think, and what they would make of it,” she says. “It made me feel ashamed.”

She heard Spruth could help. After meeting with Meyer, Spruth created a tattoo of a dragonfly to cover her scars. “It really is a transformation and makes me feel proud,” she says. “The fact that he is taking the time out of his life to do this, and is not being paid, is amazing. To help people overcome these experiences is wonderful.”

As a boy, Spruth was segregated with children with learning disabilities and not allowed to participate in mainstream classes. He hungered to take classes with the other kids, but instead spent hours in study halls drawing and making art.

He was eventually diagnosed with dyslexia and vision impairment. In high school, he was invited to participate in a pilot program at Moraine Valley Community College to take regular classes. The program allowed him to listen to books on tape and work with tutors. He earned an associate’s degree, and then a full bachelor’s degree at the School of the Art Institute on a scholarship, which offered him a scholarship to earn a master’s in art therapy.

Why art therapy? “It was my life,” he says. “It all makes sense. Art therapy was all I did for myself. It was a saving grace throughout my childhood.”

Spruth volunteered at the Tinley Park Mental Health Center for three years and was hired on staff at Garden Center Services. He was invited to apply for a job as an art therapist at the Cook County Jail, but was not interested. After all, he thought, these were bad people who made their own choices.

The supervisor who interviewed Spruth laid down a challenge. “He said, ‘I want you to go home and read about the deinstitutionalizing and the criminalization of the mentally ill and then tell me if you might want to work here.’”

Spruth’s thinking transformed, and he has been an art therapist at the jail for 23 years, working with mentally ill detainees. While working at the jail, he began to see the tattoos and scars of others who wanted to erase their past. While volunteering for a women’s furlough program, it struck home.

“I saw so many women being marked with disparaging tattoos, being marked as property in degrading ways, and realized as an artist I could learn to be a tattoo artist and help them,” Spruth says.

He completed a professional apprenticeship at SouthSide Tattoos in Chicago and created hundreds of tattoos before starting Sacred Transformations in 2006. He now serves a broad range of people and gets a dozen or more applications each week.

With a full time job and two children, Spruth has many demands on his time. Yet he devotes every spare minute he can to helping others transform themselves in a positive way.

Spruth sees himself as an escape artist of sorts. He’s an avid fan and performer of magic, and considers Sacred Transformations his ultimate trick. “For a lot of people, this is about being released and set free,” he says. “Let’s get you out of this. The biggest escape is escaping the minds we’re stuck in mentally and spiritually. Be yourself, be proud.”