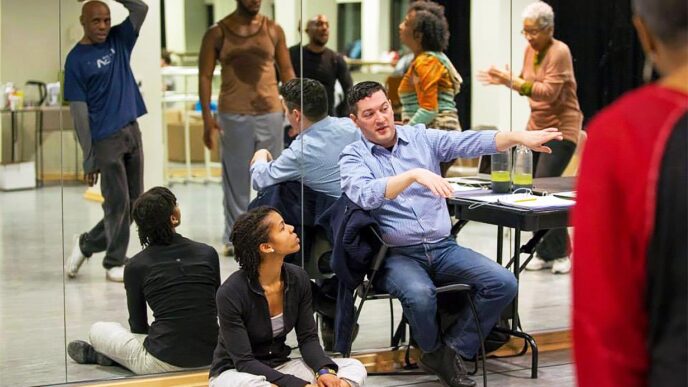 The Story of A Storyteller: Remembering PJ Paparelli

Chicago is mourning the loss of PJ Paparelli, who has been the artistic force behind American Theater Company for the last 7 years. PJ was a gifted storyteller, and my tribute to him is to try to tell the story of how The Chicago Community Trust contributed to his legacy.

In 2009, American Theater Company “graduated” from the Trust’s signature SMART Growth capacity-building grant program, leaving PJ and his team in a quandary. The other grant opportunities at the Trust prioritized access and diversity—and he was concerned that, as one of numerous Caucasian theater companies on Chicago’s North Side, ATC would be hard-pressed to find a good fit for future funding.

Having seen PJ’s riveting docu-drama “Columbinus,” I asked him if he might bring his unique talent to the aid of the fledgling National Public Housing Museum. With its stakeholders focused on saving a building from the former Ida B. Wells homes, we were concerned that stories from the displaced CHA residents could be lost before the Museum was in place.

Knowing nothing more than the media reports about the complex and controversial topic of “public housing transformation,” PJ leveraged the networks of both residents and staff associated with the creation of the Museum and the knowledge of historians and scholars; developing trust, listening and documenting first-person perspectives.

“People were eager to share, but after hearing what they had experienced and what it meant to them, I felt this awesome responsibility to bring it to the stage in a play that would do it justice,” PJ explained to me. I could not imagine what that would look like, but I put my trust in PJ (as so many CHA residents had done) and recommended a second Trust grant to support bringing his 4 years of work into production.

From its title to its turn-out, “The Project(s)” reflected PJ’s thought-provoking, balanced and deeply authentic work—his unique gift and now his legacy at American Theater Company. His immersive approach to documentary theater is embedded in the Company, including the youth ensemble with whom he travelled to Greensboro, NC to create ATC’s current production: “Greensboro: A Requiem,” running through Aug. 2nd.

A memorial service (with performances) will be held on Tuesday, July 28th at 8:00 p.m. at the Athenaeum Theatre, located at 2936 N. Southport. Doors will open at 7:00 p.m. Donations in PJ’s memory can be made to American Theater Company.

Photo: PJ Paparelli, seated, at a rehearsal of The Project(s), by American Theater Company on Facebook