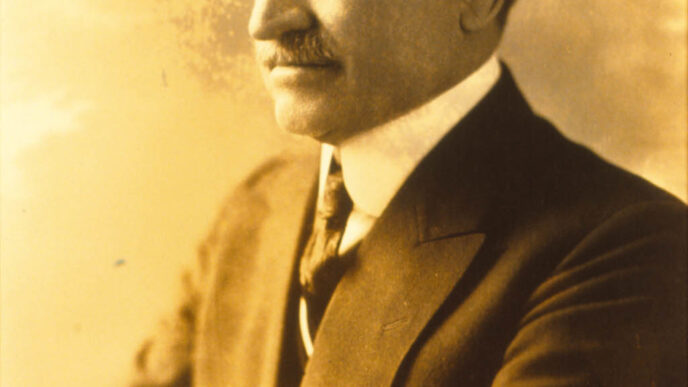 The Second Step: Bernard A. Eckhart Donated the Second Gift to the Trust

A founding member of the Executive Committee, Bernard A. Eckhart helped set the stage for community-based philanthropy in Chicago. An Alsatian whose family immigrated to Milwaukee when he was an infant, Eckhart came to Chicago as an executive in a flour milling company. Eventually, he ran the B.A. Eckhart Milling Company. Eckhart served two terms in the Illinois Senate between 1886 and 1890.

He was a successful businessman and civic leader who split his time between Chicago and Lake Forest. He acted as a trustee of the Chicago Sunday Evening Club, along with Clifford Barnes and Albert W. Harris. Eckhart served on the boards of five banks, including the Harris Trust and Savings Bank. He played a prominent role in the neighborhood parks movement and served as president of the West Park Board of Commissioners. Eckhart hired famed landscape architect Jens Jensen as General Superintendent of the park system, who went on to design Chicago’s Eckhart Park, named in his honor, on Chicago Avenue in the Noble Square neighborhood. As a member of the Commercial Club, Eckhart was one of the original subscribers to Daniel Burnham and Edward Bennett’s Plan of Chicago in 1909.

Eckhart had a wide variety of philanthropic interests. With the donations he made to the University of Chicago in 1927, Eckhart Hall was erected in 1931 to house the Mathematics Department; it has also been used for other programs related to the physical sciences, including work for the Manhattan Project during World War II.

Eckhart had the distinction of giving the second and third gifts to the Trust—$25,000 in 1920 and $25,000 in 1921—thus paving the way for a true broad-based community organization. Eckhart’s generosity followed the initial leadership gift of $400,000 that established the Trust and was provided by Norman W. Harris, Albert W. Harris and members of the Harris family.