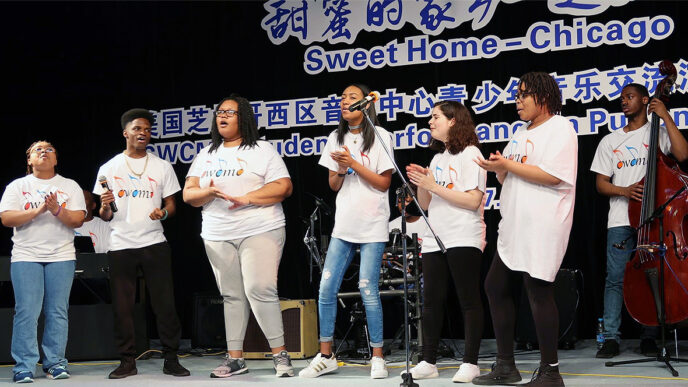 The Music School Where West Side Youth Become ‘Global Citizens’

“Many times, our kids don’t see themselves as the wonderful, talented, intelligent individuals they are. They are faced with many unfortunate things that are part of the community, but that doesn’t mean those things have to be part of them.”

Twenty years ago, Howard and Darlene Sandifer looked around their Lawndale neighborhood and were dismayed by the lack of quality music education for young people on the West Side.

[pullquote]“We want them to realize they are part of the world”: West Side music school shows #Chicago youth new horizons[/pullquote]

Sitting at their kitchen table, they developed a plan to change their community and its schools through music instruction. Their vision included enhancing personal and educational growth, so that each student could reach his or her full potential.

Drawing on Howard’s experience with educational outreach for the Chicago Symphony Orchestra and Ravinia, they developed the Lawndale Community Music Center. Without a building, they taught at schools, churches or “wherever there was a need or desire for music education.” The first program taught guitar to 15 neighborhood students.

Through grants and other partnerships, their program—soon renamed the Chicago West Community Music Center (CWCMC)—began to grow.

When Darlene and Howard Sandifer saw the critical lack of music instruction for young people on the West Side, they decided to launch a music program of their own. Teaching in schools, churches or “wherever there was a need or desire,” their first program provided guitar lessons to 15 neighborhood students. Photo by Nicolette Stanton.

In 2015, CWCMC was selected to participate in SMART Growth: a signature grant program of The Chicago Community Trust. This four-year initiative provides small, neighborhood-based arts organizations with general operating funding, while helping them strengthen their operations and management practices to become sustainable and resilient.

Today CWCMC operates out of new facilities in the Garfield Park Fieldhouse, providing instruction for 700 to 1,000 students each year. Howard acts as executive director while Darlene is the managing director.

“When we first started taking field trips downtown, many of the younger children had never seen Lake Michigan. Going into some of the buildings, some of them had never been on an escalator.”

“We still focus on North Lawndale and Garfield Park, but now we have students from other neighborhoods, schools from all over the city, and as far away as Aurora,” said Howard. “Our community’s gotten bigger. We like that because they work together to develop relationships across community lines. We welcome everyone to our community.”

In addition, CWCMC holds outreach programs at some Chicago Public Schools, offering small group lessons during and after school hours.

“We want them to realize they are part of the world, that they are global citizens,” said Howard.

Twenty years later, the Chicago West Community Music Center teaches as many as 1,000 students each year, drawing students from as far away as Aurora. But the program “still focuses on North Lawndale and Garfield Park,” say the Sandifers—and has opened up the world to young performers from those neighborhoods, as on their recent cultural exchange to Shanghai, China.

As part of learning to be global citizens, CWCMC groups have performed in cities around the world, including Paris and Sao Paulo. Before the trips, students are told what to expect while traveling and about the cultural differences they will encounter.

“Every place we’ve gone, they’ve made friends and they keep in touch with the students they’ve met in other countries,” said Darlene. “They’re building bridges.”

A grant from the MacArthur Foundation provided the funding for an exchange program among low-income youth—teaching Chinese musicians about music from Chicago, and Chicago musicians about traditional Chinese music. In April 2017, a group from CWCMC visited Shanghai, Hangzhou City and Ningbo, where they taught, collaborated and performed Chicago jazz, blues and gospel.

“They loved Shanghai. It was so modern,” said Darlene. “Many people there had never seen African Americans before. They stared, but they were very, very friendly. In stores, people wanted to take pictures with them and the kids felt like movie stars.”

“When we first started taking field trips downtown, many of the younger children had never been outside of their community,” said Howard Sandifer. But today those students’ talent and dedication is helping them reach new horizons. Thirty members of the CWCMC orchestra will appear at the Shanghai Music Festival in July 2018—the first non-Asian ensemble ever to be invited to perform.

The second part of the exchange program took place a few months later, when a group from the Shanghai Pudong New Area Young & Children’s Center came to Chicago, where they performed traditional music. One of the highlights of their visit was a joint performance of Michael Jackson’s “We Are the World” at the Garfield Park Fieldhouse.

“The Chinese students were excited to be in Chicago,” said Howard. “One of the biggest things that impacted them was the diversity of people in Chicago. In China, 99 percent of the people they see are Chinese. Here, they saw people of every color, shape and persuasion.”

The Chinese students loved the American music. When they got home, they started a jazz band. Their school suggested having an exchange every year for the next three years.

Thirty students from the WISH Program orchestra will perform at the Shanghai Music Festival in July 2018—the first non-Asian ensemble ever to be invited to perform in the festival. In turn, thirty Chinese students will come to Chicago in August for a few days and then go to Boston’s Berklee College of Music.

Former CWCMC students have gone on to work in many different fields, including music. They credit what they learned at CWCMC about communication and responsibility with preparing them for job interviews. “They tell me that just having been in an environment that’s friendly and where you’re learning after school made a difference in their lives,” Darlene said.

“They tell us, ‘If you hadn’t helped me channel something, I don’t know where I’d be.’”