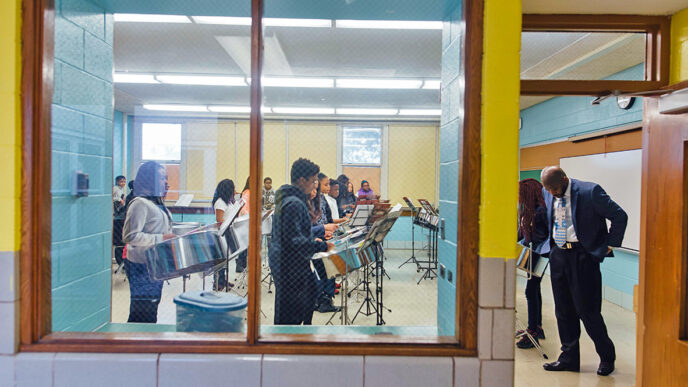 The Music Mentor Teaching Steel Drums on the South Side

Julian Champion remembers that when he was around age 7, he had one burning desire—to play a musical instrument. The young boy would accompany his mother, a domestic worker, to one of the homes she cleaned in a well-off area of Trinidad. The children in the household took music lessons.

“I wanted to do that but never could,” Champion recalls. “That was not something my mom could afford to do, send me for lessons, purchase an instrument.”

The desire to play music stayed with him throughout his childhood years. Finally, at 17 he had the chance to pick up the trumpet when his church offered a little band program. He quickly became the band’s leader.

Champion eventually moved to the United States and became a citizen. He studied theology and earned a masters degree in accounting and finance. But he never relinquished that deep desire he had as a young child, which ultimately led to another: “I wanted to offer music instruction to young, disadvantaged kids, who maybe had the desire but not the resources,” he says.

After more than 15 years of working in ecumenical and social service agencies in North Carolina, Virginia, Minnesota, Indiana and Illinois, Champion founded the West Point School of Music in 2011. The school contracts with Chicago Public Schools to provide music instruction to students on the south and west sides. Champion is West Point’s executive director. Several of his former students are on the staff.

West Point, which gets its name from the well-known military academy, is part of The Chicago Community Trust’s SMART Growth initiative: a multi-year grant initiative to help small, diverse arts and culture organizations become more sustainable, so that they continue to enrich neighborhoods for the long term.

“I do not see anything else that can focus the mind the way that learning to play an instrument does,” Champion says.

Champion also formed the Epic Steel Orchestra, an energetic ensemble of young musicians. The orchestra performs Latin, jazz, marches, classical and contemporary music for audiences around the Midwest. All Epic members instruct new students as a part of their service to West Point’s vision.

“I want to get to every young person who lives in a disadvantaged community, who probably wants to play an instrument and not even know it,” Champion says over the sounds of jazz music in a crowded coffee shop.

“If I provide them the access, they may discover it’s something they’re really good at. That instrument, that trumpet, clarinet, saxophone might be their ticket to creating a better life for themselves and their own children.”

West Point provides two programs for Chicago Public School students: a steel drum ensemble and a concert band program. “He is very passionate about what he does,” says one school principal who works with Champion, “and it is making a positive impact upon my students.”

Champion is at heart a philanthropist, seeing needs and finding ways to fill them.

“My heart is broken for disadvantaged communities,” Champion says. “I see thousands of people being left to their own devices. Everybody seems to have given up on trying to make a difference. The biggest casualty is children… I wanted to solve that problem.”

Raquel Davis, principal of Mt. Vernon Elementary School, hired Champion to put together a student orchestra, starting with a two-week music theory class. “I was astonished by the skill and ability of the students” after working with him, she says. “He is very passionate about what he does, and it is making a positive impact upon my students.”

Champion serves as a mentor to his students, many of whom become instructors with the program after graduating. “That instrument, that trumpet, clarinet, saxophone might be their ticket to creating a better life for themselves and their own children.”

Ashanti Gayden, 20, learned to play clarinet at West Point. With Champion’s help, she won a spot at Chicago High School for the Arts. Now she’s a sophomore at the University of Illinois-Chicago studying music performance and the principal clarinetist for the UIC Wind Ensemble. “He always told me to be a leader,” Gayden says. “To go out on your own and make it happen.”

Thoughtful and intensely passionate about all the children he mentors—many see him as a father figure—Champion pulls out his iPad to show photos of current students. With a swipe, fresh, young faces appear on the small screen. He points to one boy. “He’s amazing, a fifth grade trumpet player at Kellman Elementary School,” where Champion teaches weekly. “There he is. He’s so cute. He’s an amazing trumpet player. He’s going to be one who we’ll probably be buying his CD one day. He’s going to be doing this [playing music] the rest of this life.”

Champion pauses to reflect. “Sometimes I say to myself, ‘Here I am.’ For years I struggled by myself to do this. What if I didn’t bother? What if I said, ‘Forget it?’”

He answers his own question. “This thing has captured my mind and my heart and my emotions, and I can’t let it go.”