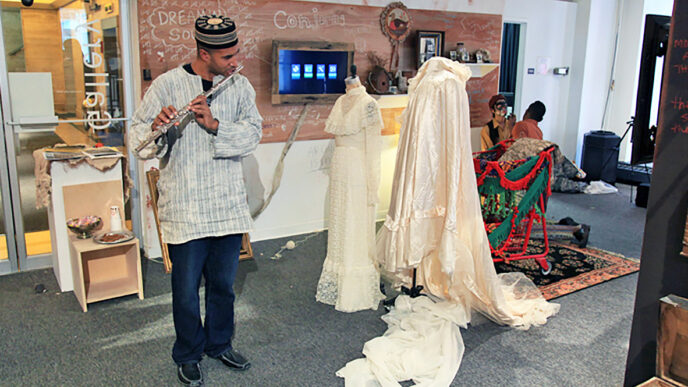 On a blustery Tuesday evening, a small group of musicians are gathered in a three-story greystone at 38th and Michigan, tuning their instruments and warming up to play. One of them lights a bundle of dried sage and waves it through the air, spreading the pungent smoke in a cleansing ritual to help set a positive mood.

Soon, a group of French musicians on a visit from Paris arrive and set up their own instruments. Artist and singer Viktor Le Givens sets the sage bundle on a small piece of pottery, takes his spot beside the piano and offers a welcome to “our friends from across the ocean.” Before long, the sounds of free-form jazz fill the room.

This evening’s event, meant to help build bridges between a diverse group of musicians, is hosted by the Participatory Music Coalition. The group, with about 10 musicians and artists at its core, was formed to promote the idea of music as a healing, connecting force instead of just a commercial performance.

“There’s definitely a community orientation of the work that we’re doing,” says Adam Zanolini, a co-founder and driving force of the group who plays the flute, saxophone, bass guitar, conga drums and, on occasion, keyboards.

“A lot of us are really inspired by the art and music created on the South Side. So that’s part of the spirit, to be really serious about presenting our work and involving the community. It is about giving back, making something positive happen.”

“Everyone says music is a universal language [that] brings people together,” Zanolini adds. “That’s what participatory music is for—to bring people together for a common purpose.”

Zanolini, a lawyer by trade who is working toward a doctorate in ethnomusicology from the City University of New York, cites an example. “Music in church: everybody in church is supposed to participate in the music and become involved in it, because the point is that everyone should be worshipping together,” he says. “But now, music has become largely dominated by this kind of money thing, people trying to generate revenue by it. It’s less about community spirit.”

The Participatory Music Coalition was born from a series of jazz sessions known as the Sonic Healing Ministries, created by David Boykin. After meeting and playing together at these weekly events, several musicians soon formed their own group, which became the Bronzeville-based Coalition.

In its performances, the group aims to take the audience—also called “guest participants,” since the goal is to get them involved in the event—through a “journey of sound, text, movement, poetry, song, moving images and cuisine.” The music ranges from standards to jazz to original compositions and “cycles of rhythm and harmony” that defy genre. And in the spirit of community, events are free, though donations are accepted.

“Everyone uses the word ‘healing’ when they come,” Zanolini says. “We spread positive vibrations and people can feel it.”

Attorney Adam Zanolini co-founded the Coalition to transcend the commodification of music and reclaim its creative, positive powers. “If people have an instrument in their hand,” he explains, “they don’t have a gun there.”

The Coalition believes that music can help curb violence by spreading a message of peace and keeping young people engaged. Aware of the lack of music education in many public schools, the group hopes to hold a youth festival next spring.

“If people have an instrument in their hand, they don’t have a gun there,” says Zanolini. “So you have to wonder if that’s related to the upsurge in violence. Music is a creative thing and creative things are positive, the opposite of destruction.”