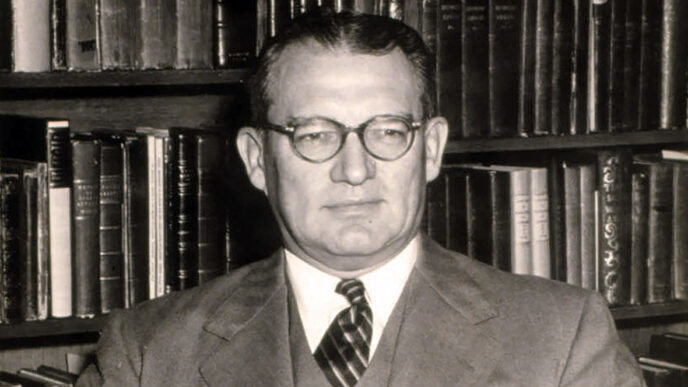 Hermon Dunlap Smith led both Marsh & McLennan, Inc., and The Chicago Community Trust. A brilliant philanthropic leader and businessman, Hermon “Dutch” Dunlap Smith served as Chair, President and CEO of Marsh & McLennan, Inc., and also served on the Executive Committee of The Chicago Community Trust for 33 years from 1939 to 1972. He became the third chairman of the Trust’s Executive Committee succeeding Edward Ryerson in 1959.

Smith never knew his father, who died shortly after his first birthday. His relationship with his mother, Harriet (Flower) Smith, as well as with her mother—his grandmother, Lucy Flower—took on special significance. A prominent social reformer and a close friend of Jane Addams, Lucy Flower was deeply engaged in community philanthropy. It was largely through her efforts that a juvenile court was established in Chicago, and she promoted industrial schools that eliminated the need to send children to the county poor house.

In Smith’s words, the philanthropic involvement of his mother and grandmother “affected me considerably” and shaped his dedicated leadership in charitable initiatives. There was a time when he was President or Chairman of ten different boards at once. He served as president of the Newberry Library, the Chicago Historical Society, the Adler Planetarium, the Welfare Council of Metropolitan Chicago, the Illinois Children and Home Aid Society, and the Adlai Stevenson Institute of International Affairs at the University of Chicago.

He led the Field Foundation of Illinois for decades, making him a professional colleague of the Trust as well as a volunteer: first as an Executive Committee member, and later as its chair.

His wife, Ellen Catherine Thorne Smith, was a tireless community leader in her own right, as were their children: daughters, Deborah (Haight), Ellen (Buchen), and Adele (Simmons), and son, Farwell. Ellen described family life as an intimate setting where leading social issues of the day were always topics of conversation. “When my parents asked each other how their respective days went, each discussed community welfare and the various agencies in which they were involved. That is the environment in which my brother and sisters and I grew up.”

Smith’s dedication to the region was showcased even when he was not working. His favorite pastime was collecting early books and maps of the Midwest. When he made a gift of his extensive collection of old maps, especially of the Great Lakes region, he enjoyed the distinction of having a department at the Newberry Library named in his honor—the Hermon Dunlap Smith Center for the History of Cartography.

In 1978 he established the Hermon Dunlap and Ellen Thorne Smith Fund, an unrestricted fund that will benefit the greater Chicago community in perpetuity.