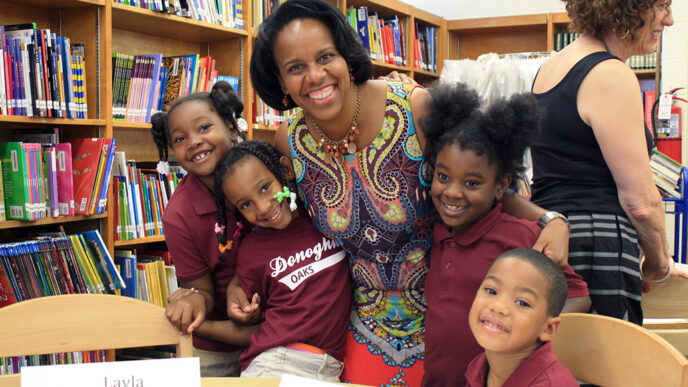 The Euphoria of Giving: Liz Thompson Pays it Forward

In celebration of Black Philanthropy Month, the Trust is featuring a series of conversations with Black philanthropists making their impact across the Chicago region. This article is the first in our series—be sure to enjoy our other interviews with John Rogers, Jr., Nate Sutton and Frank Clark.

Liz Thompson is a nonprofit leader, entrepreneur and philanthropist. As president of the Cleveland Avenue Foundation for Education (The CAFE), Thompson brings more than 25 years of experience working in the nonprofit sector, including serving as the founding executive director of City Year Chicago. She is passionate about education and youth development, and gives her time to mentor young professionals.

Thompson recently sat down with Clothilde Ewing, vice president of strategic communications at the Trust, to discuss her influences growing up, her insights into what inspires her to give and why she is reluctant to call herself a philanthropist. Some questions and answers have been condensed and edited for clarity.

Clo Ewing: You credit your parents and a strong community for shaping your values and vision. Tell me a little bit about the lessons you learned growing up that help guide you today.

Liz Thompson: The guiding influences for me are my family, my parents and my community. Both my mom and my dad had this ability to make us feel loved and demonstrate love in a way that I now call my superpower. So, what I knew early on in life was that love was enough. We were very poor in terms of resources, but we were very rich in terms of love. The same goes for my community—I felt surrounded by love and support and I try every day to pay that forward.

CE: You talk about being poor as far as resources go, but rich as far as love goes. Did you see people giving back, if not in terms of dollars, in terms of time, energy?

LT: I did. As an example, my mom volunteered on Friday nights, I think it was with an effort organized by the Black Panthers. There would be several women in the basement of a Catholic church every Friday night cooking catfish and spaghetti dinners that we would then hand out. I grew up knowing that’s just what you do: you give so that others can receive. In that particular case, it was catfish and spaghetti dinners, but my mom was always very giving, so if someone needed something and we were able to supply that, then that’s just what we did.

LT: No, it was 100% in action. I don’t remember any conversations about giving or donating. I simply asked, “Mom, can I go with you Friday?” And I was so young that my only job was to separate the paper plates that held the catfish and spaghetti. I have fond memories of those Friday nights because I was with my Mom the whole time, so all was well. Or, maybe it was the looks on people’s faces as they received those dinners.

CE: And did you think of those catfish dinners as philanthropy?

LT: Not for one second. Look, I could barely spell philanthropy at that time. I simply thought, “This is what we do. We make catfish on Friday nights, we hand it out and it feels good.” What I was probably too young to understand at the time was, how were those nights of catfish set up? What was the required infrastructure to make that happen? What were the mechanisms? I couldn’t have possibly understood all of that at the time. Now, I realize just how much planning must have gone into that effort every week.

“There is absolutely nothing on the planet that compares to giving of oneself in service to others,” reflects Liz Thompson, president of the Cleveland Avenue Foundation for Education (The CAFE). Formerly the founding executive director of City Year Chicago, Thompson is passionately dedicated to education, youth development and mentoring young professionals.

CE: Do you remember the first time you were called a philanthropist?

LT: I don’t know, maybe 10 years ago. And I immediately thought, albeit wrongly, “You have to be really wealthy to be a philanthropist. That’s not me.” Honestly, in retrospect, my first thoughts about philanthropists were that they weren’t as connected to the work as I knew I was connected to the work. So, it didn’t necessarily feel like that title fit me because I saw it as simply giving back. I was just giving of my time and resources in a way that would benefit others and I didn’t think of that as philanthropy. So, yeah, the first time I heard that word, I thought, “I don’t know who they’re talking about, but it’s not me.”

CE: Do you remember other people helping your family [growing up]?

LT: Yes, very much so. Two women from our local Chicago Youth Center come to mind, Margaret Smith and Mrs. Tonsil. These are people that helped us as kids and then growing up into older adolescents. Mrs. Tonsil helped me make my first apron for my mom and I remember her pouring love into me and my sister. That was her way of giving back to my family. Margaret Smith actually connected my brother to the people that would ultimately help him get into the Naval Academy at Annapolis.

I remember people helping us with money after there was an article written in the Sun-Times about my brother graduating from the Naval Academy and how we didn’t have enough money for my family to fly out for his graduation. After that article, donations came in to enable my family to fly out and see my brother graduate from the Naval Academy. I don’t remember who wrote the article, but someone did write it and we were able to go. So, yes, we were helped in many, many different ways.

It has been a struggle for African-Americans to get educated for our entire existence in the United States. It was forbidden for slaves to learn how to read, and yet they found ways to do it. Through Jim Crow and separate but equal laws, we’ve found ways to do it. And once it is obtained, it is something that no one can ever take away.

CE: How do you feel when you give back? What’s that feeling you get?

LT: There is absolutely nothing on the planet that compares to giving of oneself in service to others. Frankly, it’s addictive for me. I just can’t stop doing it and then I feel like I have to do more. And I want to get others involved. It’s a habit for me and there’s no other feeling I’ve been able to identify that gives me the same sense of euphoria as giving.

CE: One of the causes it seems like you and your husband give a lot to is education. Can you tell me what resonates about education in particular and why you’ve chosen to focus your giving there?

LT: I think about education going back to the days of slavery, and I really do think about it this way: it has been a struggle for African Americans to get educated for our entire existence in the United States. It was forbidden for slaves to learn how to read, and yet they found ways to do it. Through Jim Crow and separate but equal laws, we’ve found ways to do it. And once it is obtained, it is something that no one can ever take away. So, it not only resonates with us because it has been our pathway forward, but also because I think about how many people died in order to give us the access to education we have today, even though it remains a struggle for so many.

CE: Within the education portfolio, you guys have given quite a bit to Purdue University. How do you decide Purdue versus someplace else?

LT: Purdue is where we met and my husband is a trustee at Purdue. And, Purdue has one of the finest schools of engineering in the country; in particular, the Minority Engineering Program is focused on kids of color and making sure they have access to the same world-class education that everyone else does. So again, it’s making sure that our kids have access. We are proud of the experience we had at Purdue and proud of what the Minority Engineering Program continues to do.

CE: Any advice you’d give to people who feel overwhelmed about taking that first step [in their philanthropic journey]?

LT: The first piece of advice I would give is to find something that you are really passionate about, something that makes the hair stand up on your arms. And then ask, “Who’s doing work in this area? Who’s doing work in education? Who’s doing work in criminal justice reform?” Talk to friends, ask for contact recommendations, Google it, call us here at The CAFE. Do whatever you need to do to get a contact and then dive in. And, if you don’t have time to dive in, send a donation—five dollars, ten dollars, it doesn’t matter. More than likely, you’ll receive a thank-you note back and, when you get that thank-you note, it’s up to you to take it to the next level.

CE: Can you talk to me a little bit about the spirit of philanthropy in Chicago?

CE: What about the spirit of giving in the black community?

LT: It’s been there for centuries, especially in our church community. It was there back in the days when people pooled their money so that one kid could go to school, or so one family could go to Annapolis to see their son and their brother graduate from the Naval Academy. That predisposition to giving has been in our community for centuries and I am immensely proud of it.

CE: So, do you think that anybody can be a philanthropist?

LT: Yes, but I don’t always think of myself as a philanthropist to this day. I am in service to a lot of things and to a lot of people. I prefer that thought. I think we would be a much better society if we thought of ourselves as in service. That’s how I like to think of it: dollars and time, in service to others.