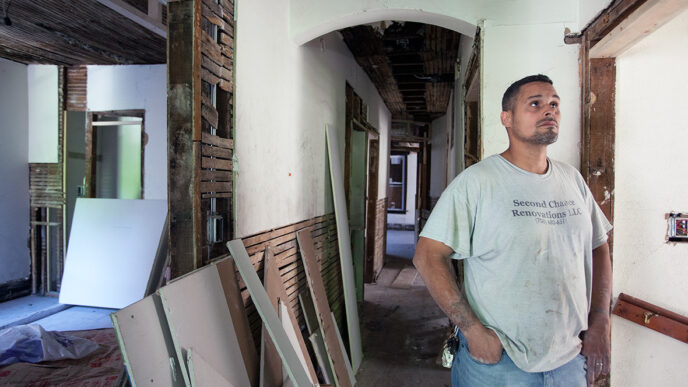 David Figueroa is a businessman who believes that, with the right support, ex-offenders can successfully integrate into society. His organization, Second Chance Renovations, employs and empowers convicted felons who are ready to re-enter society. The 39-year old Brookfield resident is passionate about working with this population because he understands them: he’s a convicted felon, too.

Though he has a background in construction, Figueroa had trouble finding work after his 2005 release from prison.

[pullquote]“All we need is a chance”: David Figueroa provides jobs for ex-offenders through Second Chance Renovations[/pullquote]

“Even for jobs I was overqualified for, I was overlooked because I was a convicted felon,” he said. “They say you can pay your debt to society, but it’s never really paid. Your past follows you.”

A friend told him about North Lawndale Employment Network’s U-Turn Permitted, a four-week job-training program that prepares ex-offenders for life after incarceration.

“They teach interview skills: how to speak properly and dress properly. They help you open a bank account, give you job leads,” Figueroa said. “I didn’t know anything like that existed and I’m grateful to them for their support.”

Today, Figueroa buys properties and renovates them. He also works as a general contractor and construction manager on projects throughout the Chicago area. His long-term goal is to use his company as a support system and training ground.

“I want to put men and women in halfway houses that we own and train them to do construction so that they can eventually get a job,” he says. “The goal is to eventually employ 20 men and women, and have a community service aspect where participants have to do 24 hours of volunteer labor with local nonprofits.”

Second Chance Renovations was previously a member of the Goodcity incubator program, which helps build capacity for nonprofit organizations. Figueroa says he’s secured bank support for the project and is currently looking for assistance as he further develops his business plan. This is a labor of love for Figueroa: he doesn’t pay himself a salary. The work, he says, is more important than a paycheck.

“The reality is that when you’re an ex-offender, no one forgives you for what you’ve done. They hold it against you for the rest of your life,” he says. “There’s no chance to succeed unless someone is willing to take a chance on you.”

This father of three takes the time to support other nonprofits, including the one that took a chance on him—he’s hired participants from the U-Turn Permitted program, and he’s spoken at two of their graduations.

Ultimately, Figueroa would like to create an environment where ex-offenders can return home and find the opportunities they need to become productive citizens.

“All we need is a chance. A small few will blow it off, but most will take the opportunity and run with it.”