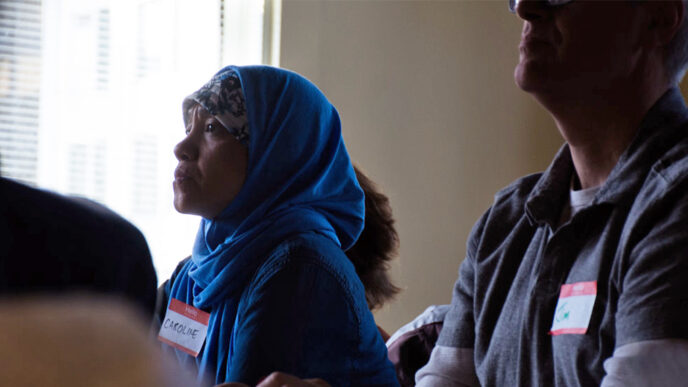 |City Bureau’s Documenters program trains residents document local public meetings and engage in the production of journalism. Participants at a recent summit were asked to describe Documenters in three words. The larger the word appears here

The Chicagoans Who Document Public Meetings—and Why They Do It

The original idea for City Bureau’s first-ever “Documenters Summit” started with a simple question: How do we create a space where our 330+ Documenters can connect, collaborate and have a hand in designing our collective work? On March 10, we put a plan into action.

City Bureau’s Documenters program trains and pays people to document local public meetings and engage in the production of journalism through our South Side media lab. In addition to our reporting fellowship and weekly Public Newsroom workshop series, we host regular trainings for Documenters and the general public on a range of skills like interviewing, note-taking, mobile photography and FOIA.

In the process, the program is building trust between people and local media, creating space for community-based narratives and distributing journalistic skills across the city.

But who are the Documenters, and what makes them do the work they do?

Well, our Documenters come from 55 of Chicago’s 77 Community Areas. They range from age 16 to 73. 61% identify as female, 33% identify as Black/African-American and a majority cite “I want to be more involved in my community” as a reason for joining the program.

We’re proud that Documenters is an inclusive, diverse and intergenerational space. But to understand who they are beyond the numbers, we invited them to a daylong design session—the Documenters Summit (aka #DocSummit2018)—to find out what motivates them and how they see their own role within society.

At the Summit, we asked people to use three words to describe Documenters. Here’s a word cloud of those responses:

City Bureau’s Documenters program trains people to document local public meetings. At their first-ever Summit in March, participants were asked to choose three words to describe Documenters. The larger the word appears here, the more often it appeared among the responses.

These aren’t journalists by trade. They’re citizens who understand the value of reclaiming journalism and citizenship for the public.

Why do they do what they do?

Here are a few responses:

“About how to empower communities, build trust in media and be more fearless personally and in my coverage”

“Everyone has a voice no matter how invisible they may feel”

“That I’m more in-demand (impactful) than I realized!”

And when we asked why they became Documenters:

“My community needs me!”

“I want a newsroom-like experience with a community flavor”

“I want to make sure that public discourse includes diverse perspectives”

The give and the get

The Documenters program creates a new space and a new dynamic for civic engagement: unlike volunteering or donating to charities, the work in which Documenters engage is, by its nature, a two-way exchange where they derive concrete benefits (skill-building, knowledge about the city, self expression) while contributing to their communities in meaningful ways. In short, they can give and get at the same time.

The Documenters program creates a new space and a new dynamic for civic engagement.

Getting paid for their work also is a crucial part of this exchange, not necessarily because of the dollar amount, but because it acknowledges the value of their time and allows them to prioritize the assignments among competing interests.

What the Documenters said:

“If you’re not getting paid, it’s just a hobby. So that diminishes the amount of effort—you just fit it in whenever you can. I can go see [Black Panther] or I could go to this community group. It’s a hobby, it’s not income.”

“It matters—the work around City Bureau feels worthwhile, but that doesn’t mean that money isn’t the thing that allows people to be in the room.”

“Having that direction, and being able to funnel that energy feels like it fills an important need. And I learn about things going on that I might not otherwise pay attention to.”

The Documenters theory of change

City Bureau is providing a structure that can activate a segment of citizens who have not been invited to participate in traditional civic processes but who want to engage. The Documenters program highlights the mechanics of civic processes and gives people an on-ramp and a role to play in their communities, which makes it easier for them to get involved without worrying whether they “belong.” We’ve found that Documenters don’t identify as do-gooders, they identify as citizens.

This sense of belonging and the agency Documenters wield while on assignment is key to building the kind of civically minded community we want to see in Chicago.

That, at its core, is our theory of change for the Documenters Program: Documenters take on paid assignments, attend trainings in democratized journalistic skills, demonstrate their skills through meaningful, impactful production then go on to connect with other civic actors and make ethical, civically responsible decisions.

Interesting in becoming a Documenter? Visit the Documenters homepage for more information.