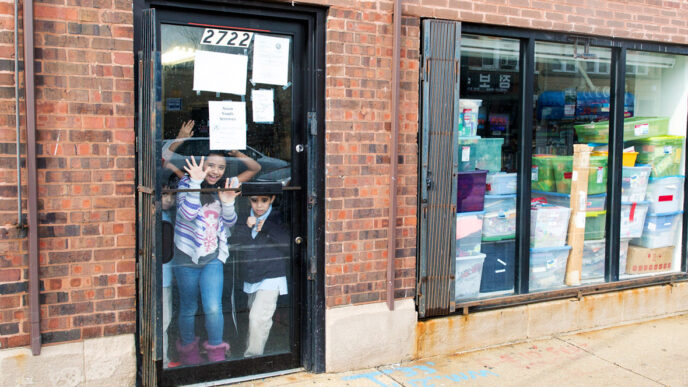 In a cramped storefront in Albany Park, 35 schoolchildren get a little bit of magic nearly every day.

They eat hot food after school. They do homework. They play games. They learn how to dance. They take drum lessons.

They do all this under the watchful eye of Shari Fenton at Asian Youth Services.

More than 23 years ago, Fenton opened Asian Youth Services because, she says, “Southeast Asian kids in Uptown weren’t getting the services they need, and the dropout rate was astronomical. I wanted to do something to change that.”

“These were newly arrived Vietnamese, Amerasian, Laotian and Hmong kids. I was just trying to get them to go to school at that point,” says Fenton. “It became more complex after learning about their lives.”

One key thing Fenton learned was that many of the children were not getting enough food to eat. “Kids can’t do homework if they are hungry. I like to think that everything else I do is important—but honestly, they need to eat.”

And today she feeds 35 Ethiopian, Hispanic and Asian young people every day in that tiny Lawrence Avenue storefront, using donations—and her own credit card.

“I spend about $1,000 a month on hot food for the kids,” says Fenton. “I thought getting them scholarships to private schools would be important, but they come here for food.”

After eating, there’s plenty more for the students to do: homework, reading, games, tae kwon do, drums, dance. “I want to give kids opportunities, try to stimulate their interests and creativity. Let them learn about things they can become involved in.”

Since the founding of Asian Youth Services, Fenton has been pretty much its only staff member, with occasional help from volunteers. She works six to eight hours each day, six days a week.

And she works for no pay. Fenton has not been able to pay herself a salary for seven years.

“I suppose I could eliminate services and take a salary, but it doesn’t seem like the right thing to do. The kids are more important than money for me.”

Getting the kids a good education is what’s most important to Fenton. Over time, she learned that parochial schools were often the best fit for the students she served. “In parochial schools, classes were smaller. Kids who were dropping out are now doing well and getting A’s.”

So Fenton started negotiating with local schools, persuading them to reduce tuition. The results of her efforts are stellar. About 99 percent of the students who stay in the program graduate from high school, with many going on to college.

“These kids just need opportunities,” Fenton says. “They will either live up to or down to your expectations. Kids will give you their best if you tell them they are capable of doing it.”