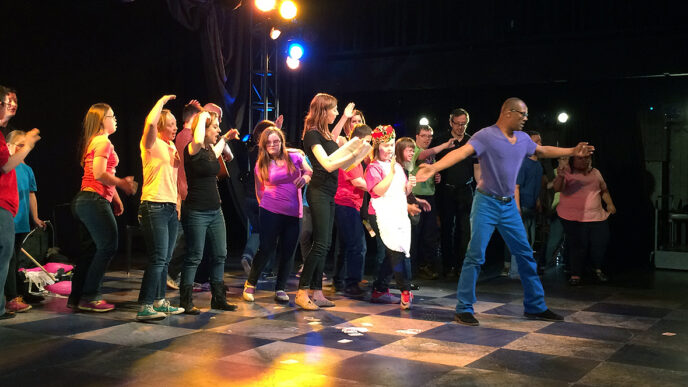 Teens with Down Syndrome Find their Voice—On Stage

The young performers in a new play, What You Will, were having a wonderful time at rehearsal one recent Friday evening at the Menomonee Club’s Drucker Center on the Near North Side—singing, dancing and acting up a storm. They were especially excited because the single performance they will give of this play was just a week away.

All the show’s cast members are aged 14 to 21, and all have Down syndrome. They have collaborated to create What You Will from the ground up. The script explores themes of self and identity, offering an introduction to each performer’s unique voice.

Each of the 19 actors has a speaking part in the four lively skits that are the bones of What You Will—and, there are production numbers. One skit riffs on themes from the Disney movie Frozen; another features a plane crash in which everyone on board has to figure out what he can do to help.

What You Will is a co-production of the Chicago Children’s Theatre and ABLE (Artists Breaking Limits and Expectations), a program that provides artistic experiences for young people with special needs. The idea is that they will gain skills and confidence, and start on the road to attaining their full potential.

“All kids need to find their voices,” says John Walsh, whose daughter, Lucy, 18, a junior at Ogden High School in Chicago, is an especially outgoing member of the company. Walsh thinks acting with ABLE has been great for Lucy’s confidence.

ABLE was founded by Katie Yohe and Lawrence Kern as a theater program inside GiGi’s Playhouse, a Hoffman Estates-based national organization that supports the families of children with Down syndrome. Any teenager with special needs can participate in ABLE; each performer has an assistant to help them with their lines.

“We want to give them something they can be proud of,” Yohe says. “It’s stressful to get up there and have to remember lines, so we take that out of it. We have a large and wonderful roster of teachers and facilitators, who all have some degree of experience in the theater.”

ABLE has only four paid staff members; all the other facilitators are volunteers, Yohe says.

Alena Brown and her mother, Naomi, found their way to the group three years ago, after hearing about it from friends.

“When my girl came here, she was so introverted. She had no friends and a lot of issues,” says Naomi Brown of 17-year-old Alena. ABLE “brought out who she is as a person. She’s more mature now. She has friends. She’s come a long way.”

“We want to give them something they can be proud of… We would love to have people come and cheer us on, and we’re offering a 100 percent guarantee you will walk out of the theater with a smile on your face.”

Yohe and Kern founded ABLE with an original corps of six kids. Today all of those founding members are still part of the ensemble. As two of them prepare to graduate next semester, ABLE is planning ways to keep them involved in the program.

“ABLE has taken off beyond anything we thought possible,” Yohe says. She and Kern try to manage the organization’s growth carefully, to ensure the best experience for each young performer.

Each semester comprises ten 90-minute classes, a dress rehearsal and a performance like the one on Saturday at a professional theater.

Yohe and Kern, both university-trained actors and longtime professional and life partners, share a special regard for Shakespeare, and ABLE does one production of a play by the Bard each year.

This spring, it will be Twelfth Night, another co-production with the Chicago Children’s Theatre and part of Shakespeare 400 Chicago, a gala local celebration hosted by the Chicago Shakespeare Theater of the 400 years since William Shakespeare’s death in 1616.

“We would love to have people come and cheer us on, and we’re offering a 100 percent guarantee you will walk out of the theater with a smile on your face,” Yohe says.