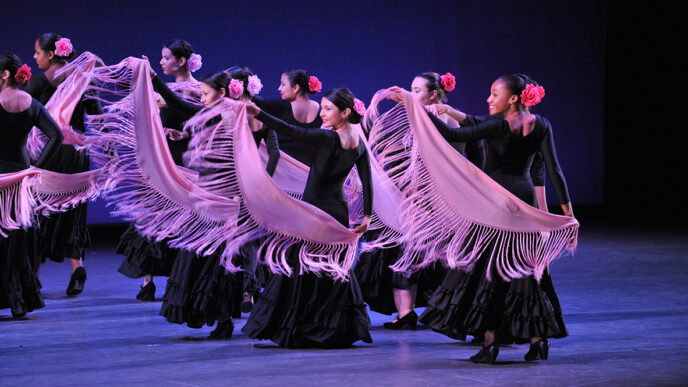 On a Saturday morning in August, teens streamed into the Harris Theater for Music and Dance. Instead of sleeping in on a lazy summer morning, they were ready to dance.

The organizers behind the inaugural Chicago Teen Dance Festival had been preparing for this day for months. As an afternoon showcase during the Chicago Dancing Festival, the Teen Dance Festival brought members of a variety of youth dance programs from around the city to show their moves.

“Each student company really stepped it up and performed beautifully,” said program manager and choreographer Kristina Isabelle. “The finale with all 153 kids on stage dancing together was powerful, inspiring and moving.”

Inspired by another project that the Trust funds, the Young Jazz Lions program at the Chicago Jazz Festival, the Chicago Teen Dance Festival celebrates local dance programs and the young dancers participating in them.

Another goal of the Festival is to raise the profile of the dedicated dance instructors, while also stressing the need for more teachers.

While dance is now included as a credit course in Chicago Public Schools, only four high schools offer a class. Why so few? Because of a lack of certified dance instructors, Isabelle explained.

“Right now there is no certification program in Illinois. So there is a challenge to find certified teachers. Until there are, the programs can’t grow in the schools.”

Isabelle—who has her own modern dance company, Kristina Isabelle Dance—and Joshua Ishmon of Deeply Rooted Dance Theater worked with the curatorial committee to select the participating groups, and co-choreographed the Festival’s finale.

“We looked for passion and a love of dance,” Isabelle said. “We wanted a variety of styles and techniques.”

The importance of dance in the lives of these enthusiastic teens, who come from every corner of the city, cannot be overstated. Not only does the program build friendships, confidence and a passion for dance but it also gives the teens a look at the professional world of dance.

“I take every dance opportunity I get,” said Cindy Guiterrez, 16, of City Dance. “I want to grow as a dancer and experience new styles of dance with different dance teachers.”

And one of those in-demand dance instructors might someday be Lawrence Powell Jr., 17, who attends the Chicago High School for the Arts where he is studying dance. He’s leaning towards becoming a professional dancer with a focus on teaching and choreography.

“One of my goals for the future is to help dance communities join together and collaborate on performances,” Powell said. “We need to come together as one and show everyone what we have to offer.”

As for the future of the Chicago Teen Dance Festival, the goals remain the same with the added hope of expansion.

“We’d like to bring in more professional artists, add more dance and choreography workshops, and cross-cultural training between the dance groups,” Ishmon said. “This is a bridge for teens to build friendships and collaborations across different neighborhoods throughout the city.”

In the early 2000s, Chicago’s dance scene burgeoned with creativity and innovation. Sarah Solotaroff Mirkin shares her memories of the story behind that growth: Elevating Chicago’s Buoyant Dance Community